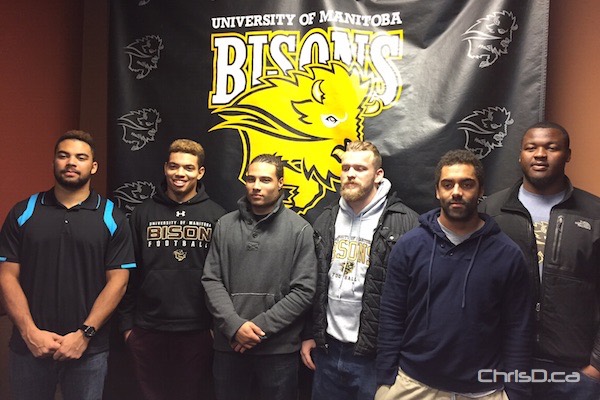 Six of eight members of the U of M Bisons named to the 2014 Canada West Football All-Star Team. (CHRISD.CA)

Eight University of Manitoba football players have been named to the 2014 Canada West Football All-Star Team.

Making the shortlist of outstanding student-athletes are U of M Bisons Nic Demski at the inside receiver position, Nevin Gamblin at the guard position, Matt Sawyer at wide receiver and Kienan LaFrance at the running back position. On defence, third year Evan Foster was named at the defensive end position, third year David Onyemata at the interior lineman position, fifth year Jordan Linnen at halfback and fifth year Tremaine Apperley at the cornerback position.

“Our football team has put in so much work over the last year and collectively have come so far. I’d like to congratulate the eight student-athletes who have been recognized as Canada West All-Stars and as representatives of our entire group’s hard work and perseverance in 2014,” head coach Brian Dobie said in a statement.

The Bisons will play in the 78th Hardy Cup (Canada West Final) Saturday afternoon in Calgary against the Dinos. Kickoff is 3 p.m.