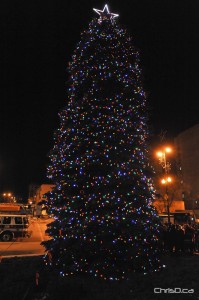 WINNIPEG — It took a forestry crew several days to completely cover it in 9,000 multi-coloured LED lights — and Friday was showtime.

The giant 40-foot Colorado spruce Christmas tree in the courtyard of City Hall was illuminated this evening. Mayor Brian Bowman took part in his first ceremonial tree-lightning on live TV just after 6 p.m.

The Winnipeg Children’s Choir was on hand to provide music for those in attendance, and the Salvation Army collected donations for their annual Toy Mountain campaign.

Following the lighting, Bowman invited members of the public into City Hall and the mayor’s office as part of an open house.