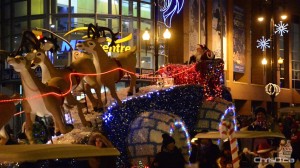 Santa Claus and his sleigh arrive to greet the thousands of spectators lined up to see him on Saturday, November 15, 2014. (SARAH TAYLOR / CHRISD.CA)

Spectators came dressed for the weather, decked out in winter clothing as the 16-block parade made its from Young Street all the way east down Portage Avenue to William Stephenson Way. 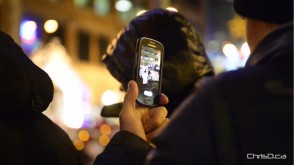 A man captures the 105th annual Winnipeg Santa Claus Parade through the lens of his cell phone on Saturday. (SARAH TAYLOR / CHRISD.CA)

New this year was several small pyrotechnic displays along the route replacing the usual post-parade fireworks at The Forks. Organizers said the idea was to shorten the day for many in attendance, who show up an hour or more before the parade gets underway to take in the many block parties held by supporting organizations.

A total of 90 floats were entered in this year’s parade, down from the roughly 100 in previous years.

The parade is put on by volunteers with JCI Winnipeg and supported by Manitoba Hydro.