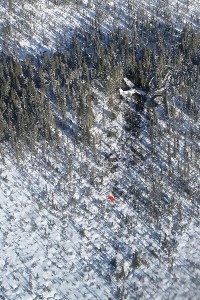 An aircraft was forced to land in a swamp area near Lansdowne, Ontario on Tuesday, November 18, 2014. A crew from 435 (Transport and Rescue) Squadron at 17 Wing Winnipeg was dispatched to the crash site. (HANDOUT)

A training exercise for a search and rescue crew from 435 (Transport and Rescue) Squadron at 17 Wing Winnipeg turned into a real life rescue operation on Tuesday.

A CC-130 Hercules aircraft from the base was preparing for a simulated mission when it was tasked to locate a downed aircraft by the Joint Rescue Coordination Centre (JRCC) in Trenton, Ontario.

The plane was located near Lansdowne, Ont. after experiencing troubles and force-landing in a swamp about 8 km south of the town. A SPOT beacon was activated in the same area.

The crew from the downed plane was seen soon after walking around the crash scene. No major injuries were reported.

“Those guys were well prepared,” said Captain Kevin Coulombe, aircraft commander of the CC-130 Hercules that located the crash site. “They had a fire going, they had food and water, they had a tent set up, and they were ready.”

Search and Rescue (SAR) Technicians dropped a message bundle down to the site, which contained a radio. The CC-130 Hercules remained on the scene until a Ministry of Natural Resources helicopter arrived to pick up the people at the crash scene and transport them to the airport at Lansdowne House.