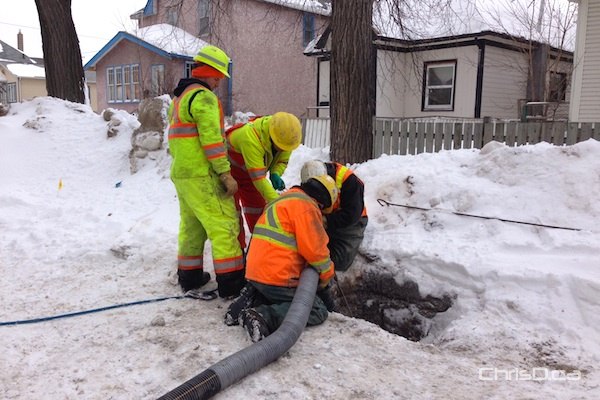 WINNIPEG — Preparations are well underway at the city in the event frozen pipes plague residents and businesses for a second year in a row.

The city on Wednesday said it has a plan to respond quickly should frozen water pipes become an issue this winter due to extreme frost depths.

Additional thawing equipment has been brought in and additional staff have been trained to respond.

“We will be closely monitoring a number of conditions that contribute to frozen water pipes, such as frost depth, and will be ready to roll out our response plan very quickly if we determine that there is a high risk of water pipes freezing,” said Tim Shanks, manager of water services.

Shanks says the city will contact property owners who are at-risk to leave a tap running to prevent frozen pipes. The first to be notified will be those who experienced a similar situation last season.

The city installed 485 ground straps last winter — a copper wire requirement for thawing some pipes — and will remain in the ground for future years to allow for a quick response at those particular locations if they freeze again.

The city will also install three new frost depth monitors are part of a pilot project at strategic locations within Winnipeg. Should the data prove to be useful, the program could be expanded.

Shanks also said the city is working to improve communication about frozen pipes to property owners, who expressed frustrations over misguided information from 311 operators.