Home » News » Committee to Search for Manitoba’s Next Lieutenant Governor

Committee to Search for Manitoba’s Next Lieutenant Governor 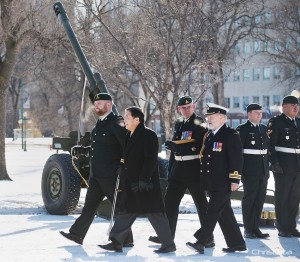 Lieutenant Governor Philip Lee (front) takes part in a ceremonial cannon-firing outside of the Manitoba legislature prior to the reading of the throne speech on Thursday, November 20, 2014. (SARAH TAYLOR / CHRISD.CA FILE)

Prime Minister Stephen Harper has put the wheels in motion to begin the process of selecting a new Lieutenant Governor for Manitoba.

A five-member advisory committee on vice-regal appointments has been put in place to begin the search for appropriate candidates to fill the position.

Philip Lee is Manitoba’s current Lieutenant Governor, having assumed the role since being sworn-in on August 4, 2009. Lee, 70, was preceded by John Harvard.

The advisory committee will consult with a wide range of stakeholders on prospective candidates and provide advice to Harper on the progress of committee deliberations. The committee will then present a reporter to the Prime Minister with a shortlist of proposed candidates for consideration.