Mondetta Opens First MPG Store at U of W 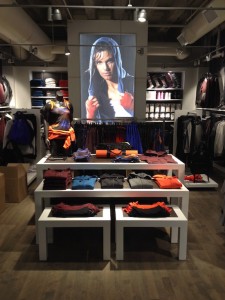 A clothing company originally founded at the University of Winnipeg is opening up its first shop on campus nearly 30 years later.

Mondetta Clothing/Mondetta Performance Gear held a soft opening Monday on the second floor of the Duckworth Centre within the United Health and RecPlex.

Mondetta Clothing was founded at UWinnipeg while all four original founders were students in 1986. The 600 sq. ft. MPG on Campus store will be staffed by UWinnipeg students in partnership with the Faculty of Business and Economics.

“Having first started at the UWinnipeg, it is truly an honour and a genuine joy to return with a retail outlet to serve not only the students at the school, but also the Winnipeg community at large,” said Ash Modha, Mondetta CEO. “And as we continue to see the convergence between brick and mortar and online stores, MPG on Campus will act as a fantastic learning experience as to how consumers in the future will change their buying behaviours.”

The MPG on Campus Winnipeg store marks the company’s first North American retail expansion outside of its 15 stores in Seoul, Korea and around the world.

A grand opening celebration is planned for December 13.