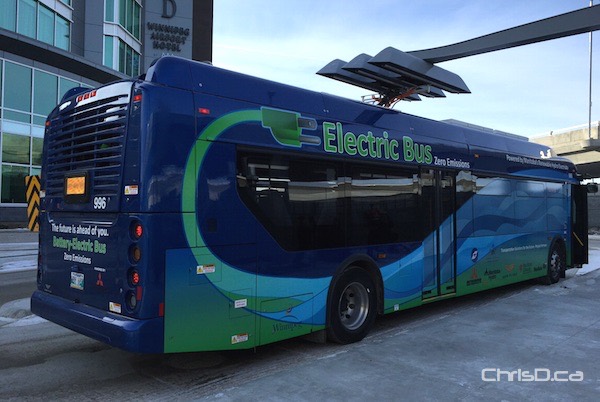 One of four Xcelsior battery-electric buses to depart from James Richardson International Airport to East Kildonan and back. (CHRISD.CA)

Winnipeg Transit is adding up to four new battery-electric buses to its fleet in a new daily route leaving from James Richardson International Airport.

The Xcelsior buses, manufactured by Winnipeg-based New Flyer Industries, will operate on a 40-kilometre, two-hour route that will travel to East Kildonan and return to the airport beginning Friday.

As part of the route, the Winnipeg Airports Authority permitted a high-power charging station to be installed at the airport.

“We didn’t want an easy route,” said Paul Soubry, New Flyer’s president and CEO. “We encouraged Winnipeg Transit to select a route that would showcase the technological capability of our Xcelsior battery-electric bus in a real life in-service situation that will experience a wide range of weather and traffic conditions.”

The charging station allows the bus to re-power in approximately 10 minutes. For extra capacity, the battery allows the bus to operate for five hours without recharge, and by charging on route, the bus can maintain service for more than 20 hours a day.

Each electric bus also uses approximately $15 worth of electricity for every 100 kilometres travelled.

“This project is proof of that concept and we are proud that Canada’s greenest terminal at Winnipeg Richardson International Airport is the first in North America to provide an environmentally friendly transit bus rapid charge station,” said Barry Rempel, president and CEO of Winnipeg Airports Authority.

The technology in the zero emission buses was developed with the help of students at Red River College and supported by Manitoba Hydro.

The federal government provided $3.4 million to the project, while the province invested an additional $94,000 through Manitoba’s Vehicle Technology Centre for charging station development.