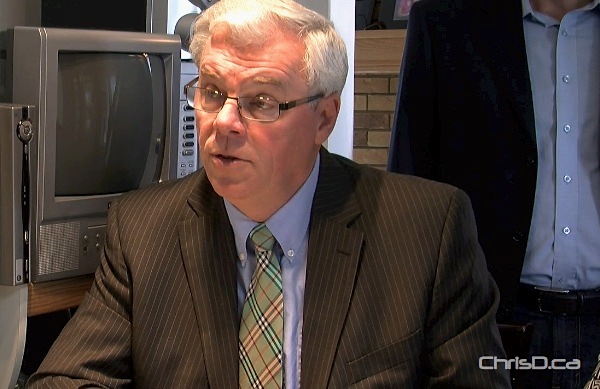 WINNIPEG — Manitoba Premier Greg Selinger faced increasing pressure Thursday to step down while he faces a leadership challenge that will culminate in a vote at the party’s annual convention in March.

Some members of the NDP council, the party’s governing body which is to meet Saturday, want Selinger and any cabinet ministers who run against him to leave their posts while the race is on. One council member, Curtis Nordman, has written a resolution for Saturday’s meeting that calls on Selinger to step down to ensure there is a level playing field.

Nordman said the resolution would not be legally binding on the premier, but could be persuasive if a majority of the 140-member council support it.

“Legally, there is nothing to tell a cabinet minister or a premier to step aside … but the perception of them staying in positions of authority, I think, is a whole different matter,” he said.

“What if one of (Selinger’s) cabinet ministers wants to back somebody else? How do they do that and … how does cabinet function under that kind of stress?”

Another council member, Matt Schaubroeck, supported Nordman’s idea and said it would prevent the possibility that politicians and staff might be penalized for choosing one candidate over another. Schaubroeck said another worry is that Selinger and any cabinet minister who runs will be distracted from preparing the spring budget.

Selinger has faced an open caucus revolt since October when five of his highest-ranking cabinet ministers suggested he should resign. They cited ongoing public anger over the government’s sales tax increase last year and low opinion poll numbers. They also accused Selinger of no longer listening to their advice.

Selinger rejected their call and said anyone who wants to remove him can do so under a little-used section of the NDP constitution, which says the party leader stands for election at every annual convention. The party is now trying to set the ground rules for that contest, but has already said there is no legal requirement for Selinger to step aside as premier during the race.

The five ministers resigned from cabinet last month to sit on the backbench. One of them, Theresa Oswald, has said she is considering running against Selinger. Current cabinet minister Steve Ashton, who ran against Selinger in the 2009 leadership race, has not ruled out a leadership bid.

Selinger refused to say Thursday whether he will step down for the leadership race if the NDP council votes in favour of the idea.

“These are speculative questions. I don’t answer them in the abstract. We deal with them in real time,” Selinger told reporters.

“We have to let those matters unfold as they should. There’s no value in speculating.”

Selinger’s leadership troubles dominated question period during the two-week fall legislature sitting that ended Thursday. Selinger has insisted he remains focused on government business, and in his annual state-of-the-province speech at a business luncheon he touted the province’s stable economy.

He also listed recent government initiatives such as new school programs and new investments in hospitals and child-care centres, but also acknowledged the leadership battle.

“It’s been a tumultuous time in provincial politics recently, as I’m sure most of you have noticed,” Selinger told the Winnipeg Chamber of Commerce.

“But in the midst of that, I want to assure you that my focus and the focus of our government has been a laser-like focus on the priorities of Manitobans.”

Chamber president Dave Angus said the political turmoil is not good for businesses.

“There are decisions being made among different departments … that we don’t know are going to stick or not.”