Manitoba’s ‘Year of Music’ Winding Down 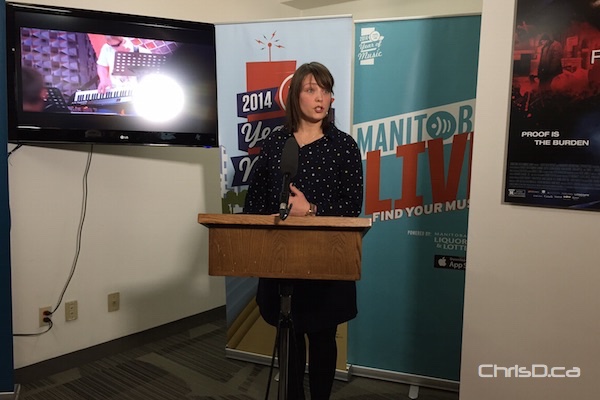 Sara Stasiuk, executive director of Manitoba Music and co-chair of the Year of Music initiative, speaks during a press conference on Thursday, December 4, 2014. (CHRISD.CA)

WINNIPEG — A joint initiative by the Manitoba government and local music community is winding down.

Year of Music encouraged province-wide celebrations of festivals and music events, such as the Juno Awards, the BreakOut West Music Festival and the Aboriginal Peoples Choice Music Awards.

“It has been an exciting and very busy year for the Manitoba music community. We were glad to see how many artists, festivals and venues jumped right in to tackle such an ambitious concept,” said Sara Stasiuk, executive director of Manitoba Music and co-chair of the 2014 Year of Music.

“The music industry is an important asset to our province — socially and economically — and it was great to highlight the energy of our music scene across Manitoba.”

As part of the economic-stimulating initiative, a Manitoba Live smartphone app was also launched, used by thousands of concert-goers to find live performances of their favourite bands.

Stasiuk added the app — currently available for iOS — will be extended to other devices in the future.

Year of Music was expected to generate economic benefits of approximately $12 million including direct expenditures, employment and tax revenues.