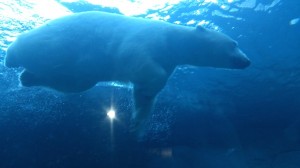 Hudson goes for a swim in the Gateway to the Arctic exhibit at Assiniboine Park Zoo. (HANDOUT)

Hudson the polar bear took his first swim in the Assiniboine Park Zoo’s pool over the underwater viewing tunnels known as Sea Ice Passage on Thursday.

The zoo has released video of the leisurely swim as Hudson explores the pool with Kaska.

Hudson and Storm have both been introduced to the new exhibit, meaning all four bears (including Aurora and Storm) will frequently rotate between Gateway to the Arctic and the Churchill Coast exhibit.