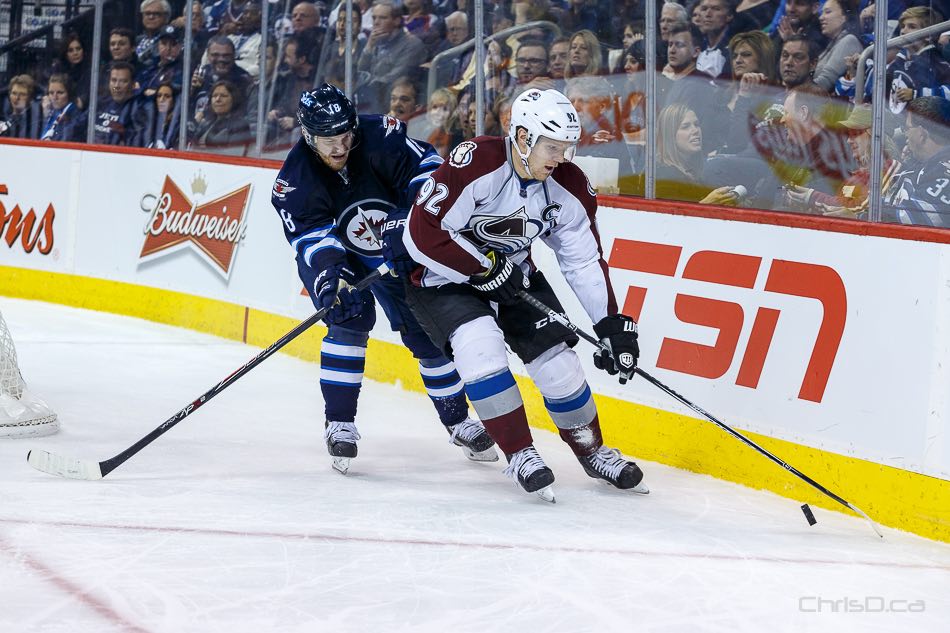 Colorado Avalanche goaltender Semyon Varlamov (1) looks on as Winnipeg Jets’ Bryan Little (18) shot zips past him for Little’s third goal of the game during third period NHL action in Winnipeg on Friday, December 5, 2014. This is the Jet’s first hat-trick since returning to Winnipeg in 2011. (THE CANADIAN PRESS/John Woods)

WINNIPEG — Chants of Bryan Little‘s name rang large from the MTS Centre rafters Friday night as the Winnipeg Jets forward recorded the first hat trick since the club reincarnated in Winnipeg in 2011.

And as countless hats and toques rained onto the ice surface, Little’s three-goal night lifted the Jets to a dominant 6-2 victory over the Colorado Avalanche, giving the 15,016 Jets faithful a heck of a Friday night they won’t soon forget.

“Our crowd is always loud and they’re like that all the time, but tonight it seemed like they were really into it. It’s probably the loudest I’ve heard in a while,” said Little of the roaring ovation he received, both when his name was announced on his third marker of the night and following the final buzzer when he was named the game’s first star to no surprise.

“Every time someone gets two goals it’s kind of like, ‘who’s going to be the one that finally does it?’ Because we’ve had a ton of two-goal games,” added Little of the 72 times previously a Jet had lit the lamp twice in a single game since the club’s last hat trick. “You knew it was a matter of time. I didn’t know if it would take this long, but we’ve got guys that can do it.”

“It’s nice to see him get it. He’s a guy that goes about his business and doesn’t get the recognition he probably deserves,” said Jets captain and line mate of Little Andrew Ladd. “It’s great to hear the crowd chanting his name.”

Winnipeg took advantage of a likely fatigued Colorado group who were pushed to overtime in Calgary the previous night, then lost an hour travelling east to Winnipeg for Friday night’s Central Division tilt.

Winnipeg grinder Chris Thorburn‘s first of the season came 4:31 after puck drop to make it eight-straight games the Jets have opened the scoring, but Colorado’s Jarome Iginla quickly tied it up less than five minutes later with a long wrister on the rush.

Little’s first goal of the night came just 3:10 later to give the Jets the lead, which they wouldn’t give back. It took a brief video review, as Semyon Varlamov made an eye-popping recovery attempt with his glove that was determined to be just inside the goal line.

“Honestly, two of the three goals I didn’t celebrate because I didn’t know (they) were in,” said Little. “The first one it looked like his glove was across the line, and the second one I thought it hit the crossbar so I didn’t even know until after.”

Andrew Ladd made it 3-1 with just 45-seconds left in the second before Little got back to work in the third.

Just 45-seconds into the final frame, Blake Wheeler fed Little from behind the goal line to quickly make it 4-1. And it did’t take long for Little to complete the trio, completing the hat trick with his team-high 11th of the season just 32-seconds later.

The Jets complete their three-game home stand with a Sunday matinée against the Ducks before heading out on a quick two-game trip through the rinks of Central Division opponents Dallas on December 9, and Colorado for the rematch December 11.