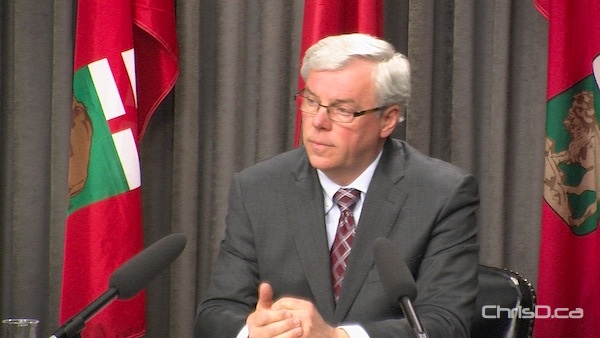 WINNIPEG —  Embattled Manitoba Premier Greg Selinger received the green light Saturday to continue to sit in the premier’s chair while also running as an NDP leadership candidate to keep his job.

The vote by the NDP provincial council was marked by fears from some members that they felt intimidated by the presence of Selinger’s staff. And according to Selinger’s critics, the result gives Selinger an unfair advantage over potential rivals in the runup to the leadership vote March 8.

“It’s been a tradition in Manitoba and also a tradition everywhere else in the country that cabinet ministers step down if they’re running for leadership,” former justice minister Andrew Swan, one of five ministers who resigned last month after suggesting Selinger resign, said after the vote.

“I think it’s quite clear to most Manitobans that the right thing to do is to step down. I still expect that the premier and any cabinet minister should do that.”

But a Selinger loyalist said the premier has never been under any obligation to resign during the leadership race, and doing so would make no sense.

“Having the leader have to step down every time somebody challenged him would just be so ineffective to running a province,” NDP backbencher Dave Gaudreau said.

Selinger has been under fire since October, when Swan and several other high-ranking party members called on the premier to consider resigning. They pointed to low opinion poll numbers and ongoing public anger over last year’s hike in the provincial sales tax.

Selinger vowed to stay on and lead the party into the next election, slated for April 2016. He challenged his critics to run against him at the party’s annual convention in March, and pointed to a little-used section of the party’s constitution that allows anyone to run for leader at the annual meeting.

Since then, party officials have worked to set ground rules for the race, recognizing that is it unusual for a sitting premier to run for the party leadership.

The closed-door meeting Saturday was at times acrimonious, according to two party sources who were in the room and who spoke to The Canadian Press on the condition of anonymity.

Some council members wanted to have all of Saturday’s votes held by secret ballot instead of the traditional show of hands. Among the 140 council members are current and former political staff, constituency officials and long-time party members.

The idea was defeated and those who voted against it included two of the premier’s top advisers — principal secretary Heather Grant-Jury and chief of staff Ihor Michalchyshyn, the sources said. That led to a complaint to anti-harassment officers which the NDP use to try to ensure meetings are conducted fairly.

That led to another vote for a secret ballot specifically on the issue of whether Selinger should stay on as premier during the leadership race. That time, the room voted for a secret ballot. Council ended up voting to allow Selinger to stay on, but the party did not release the margin.

“It’s not been clear how much support (the premier) has, and the vote didn’t help clear anything up,” said the second source.

The leadership controversy has created turmoil for the NDP. Swan and other cabinet ministers resigned shortly after challenging the premier’s leadership, saying they could no longer work with him. Selinger had to find quick replacements to head up major portfolios such as justice, health and finance.

The controversy, and the fact that Selinger remains premier, has also led to confusion for government staff and NDP politicians. Because Selinger continues to hold the reins of power, there are fears of retribution against politicians and staff who might support another candidate.

“What people are hopeful for is that they’ll get the same message this time … but so far we haven’t gotten any messages like that.”

The latter appeared to be on the mind of Swan, who was asked by reporters what the next step is for him and the other former ministers who have challenged Selinger.

“Selling memberships,” he said as he left the building.

No one has declared a leadership bid to take on Selinger as of yet. But Theresa Oswald, the former minister of jobs and the economy, has said she is considering entering the race. She said Saturday she was still waiting for further details of the leadership race to be worked out.

An NDP committee has yet to decide on some of the finer points of the leadership race, notably how delegates for the March 8 vote will be chosen in each of the province’s 57 constituencies.