Ducks Soar Over Jets, 4-3 in Overtime 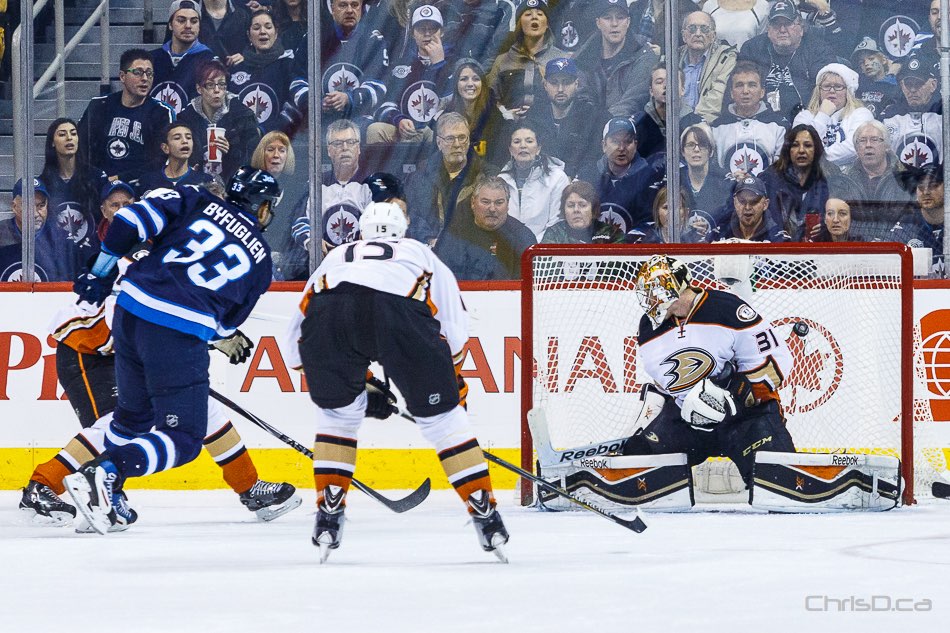 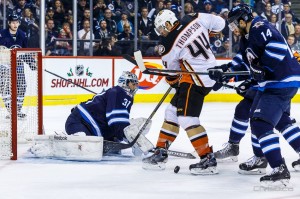 WINNIPEG — A December litmus test came Sunday for the Winnipeg Jets, as they welcomed the Western Conference’s top team, the Anaheim Ducks, to the MTS Centre. The fast, physical, talented Anaheim team – the kind that dominates today’s NHL – received hearty competition from the Jets in this one, and early on they looked caught on their heels.

Unfortunately for Winnipeg, they couldn’t cash in on their early dominance, as missed chances proved costly. A late game-tying goal by Jacob Trouba would get them a point, but the Ducks won it in overtime, 4-3.

That point, though, did count for something in the eyes of Jets head coach Paul Maurice.

“It was just a great game. Lots of chances, great pace, teams competed on every puck… Disappointing result, but a very well-played game. You don’t walk away from that one worried about the ‘what-if’s’.”

Coming in 29th in the NHL on the power play, the Jets performed admirably, getting two of their three goals on the man-advantage. Dustin Byfuglien had one in the first with Andrew Ladd adding his tenth of the season in the second. Trouba’s impressive game-tying goal was on even-strength, and the youngster showed initiative, chasing down his own rebound to backhand in his fourth of the year.

“I think that’s the characteristic we want to have, as a tough team to play especially late,” said Trouba. “It was a hard-fought game, both teams played really well, we have to take the positives out of it.”

Anaheim got goals from Rene Bourque, Jakob Silfverberg, and Ryan Kesler in regulation. The game-winner came just 53 seconds into the overtime frame, as Kyle Palmieri netted his fourth of the year beautifully, coming in wide and putting it top-shelf over the shoulder of Ondrej Pavelec.

Pavelec made some tough stops in regulation, despite letting in the overtime winner, finishing with 21 saves. On the other side of the ice, Frederik Andersen had to make 27 saves, many of them early in the game with Winnipeg coming out firing. Mathieu Perreault had two chances in the first five minutes — sniffing around the net, the first chance came on a redirect and the second off a rebound. Later in the first, Michael Frolik was on the receiving end of a tic-tac-toe play, but his initial shot bounced off the post.

“If there’s a good thing out of [missed chances], it’s that if you play the best team in the Western Conference and you have chances, you’ve worked for them,” said Maurice. “We scored three, that’s enough. You’d like to score five, six or seven if you could tonight, but the other team gets paid too.”

The Jets got those chances without one of their stars, as Evander Kane was given a game misconduct late in the second after checking Clayton Stoner in the back. Further discipline may come for Kane as the NHL reviews the play. That will be something to monitor in the days ahead.

The Jets now head out for a pair on the road, starting in Dallas on Tuesday night then heading to Colorado on Thursday. They’ll return home to play (who else?) the Ducks next Saturday night.