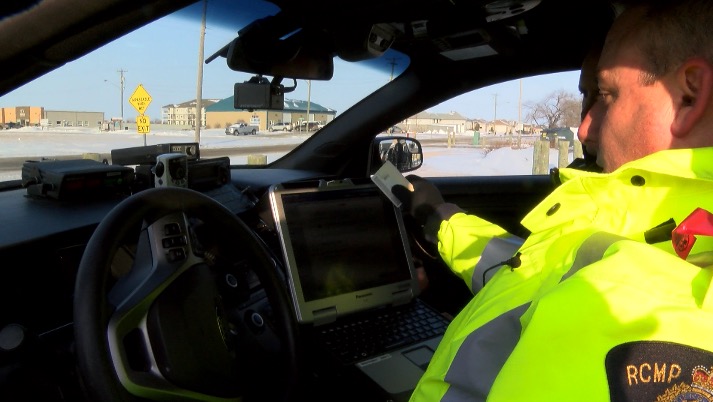 Cst. Shawn Smith swipes a driver’s licence through the new e-Ticketing system at the RCMP detachment in Headingley on Monday, December 8, 2014. (CHRISD.CA)

WINNIPEG — Manitoba RCMP have a new digital tool to quickly issue traffic tickets on the roadside.

The e-Ticketing system is the first of its kind in the province and allows officers to quickly swipe a driver’s licence to efficiently process their information through the system.

Nova Scotia and Saskatchewan are the only two other provinces in the country to utilize the technology, which allows an officer to issue a ticket in between three to five minutes compared to up to 15 minutes for a manually paper-written ticket.

“Police will be able to stop more drivers, and police traffic stops reduce crime. Not only do they take dangerous drivers off the road, but police also apprehend travelling criminals, stop the illicit movement of drugs and other contraband, and remove unsafe vehicles from the road,” said Assistant Commissioner Kevin Brosseau, commanding officer of RCMP “D” Division.

The e-Ticketing system will also reduce the number of “spoiled” tickets if an officer makes an error and the driver is let off the hook through a loophole in the way the ticket was written.

Approximately 50,000 vehicles are pulled over in the province each year, with officers issuing upwards of 34,000 provincial offence notices. About 35 vehicles are now equipped to issue e-Tickets.