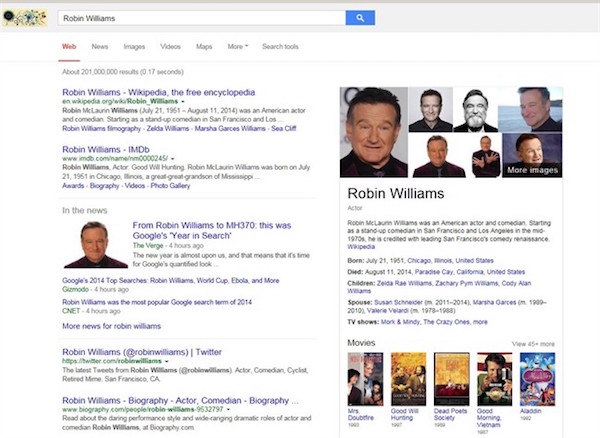 Robin Williams was found to be the top trending search term of 2014 on Google Canada. (THE CANADIAN PRESS/ho-Google)

TORONTO — The death of a beloved actor, quadrennial sporting events, a new smartphone, and a deadly outbreak topped Google Canada’s annual list of the most popular trending search queries.

After excluding routine searches that are entered by users every day of every year — most commonly for Facebook, Google itself, and YouTube — Robin Williams was found to be the top trending search term of 2014 in Canada.

The shootings on Parliament Hill came in seventh on the list of top Canadian searches for events, behind the World Cup, the Olympics, the disappearance of the Malaysia Airlines plane in March, the Ebola outbreak, the Ukraine-Russia conflict, and the Wimbledon tennis tournament. The Scottish referendum was eighth, the Justin Bourque manhunt in Moncton was ninth, and the Toronto municipal election was tenth.

Google users typically start queries with “how to” and the most common of those searches in Canada were vote, blog, puree, fundraise, Snapchat, kayak, tune, wean, moonwalk and henna.

For “What is” searches, Canadians most frequently typed in ALS, Ebola, ISIS, Bitcoin, Uber, Gamergate, Alibaba, Tinder, liposarcoma and skiathlon.