Flyers Storm Back to Beat Jets 4-3 in Overtime 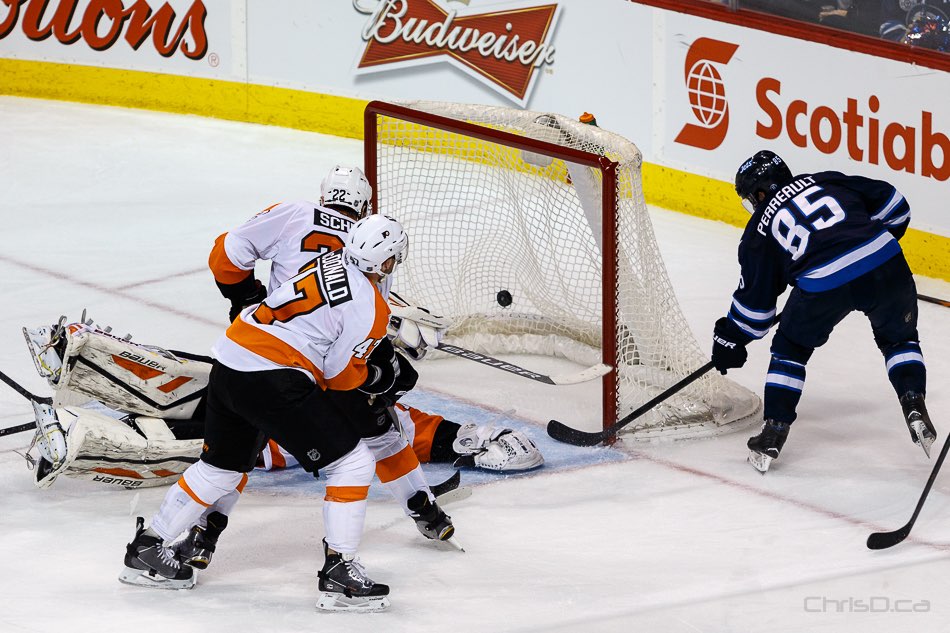 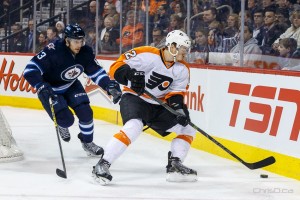 The 25-year-old Czech had two lightning-quick goals — one 41 seconds into the game, one ten seconds into overtime — to lead a furious 4-3 Philadelphia Flyers comeback win over Winnipeg.

The Jets carried a 3-1 lead into the third period, but were thoroughly outplayed in the final 12 minutes, giving up two goals to Vinny Lecavalier to allow overtime – an extra frame ended almost instantly by Voracek.

“We stopped trying to make a simple play and opted for a safe option,” said Jets head coach Paul Maurice. “We stopped making the plays you need to make and have the confidence to make, and a lot of times we did that flat-footed.”

In building the lead, the Jets looked spry, with two 26-year-olds getting pivotal goals. First, it was Matt Halischuk, who scored his first of the season to put Winnipeg on the board six minutes in. Second, Mathieu Perreault notched a point for the seventh straight game, putting home a goal in the second period to give Winnipeg a 3-1 lead. Perreault, though, admitted afterward that the Jets weren’t the same down the stretch.

“We just sat back too much. We were trying to protect a lead and this is not how we’re effective,” said Perreault. “We’re a good team when we put pressure and we get on their [defence] and we’re just sitting back.”

Dustin Byfuglien got in on the action too, scoring his eighth of the year a minute after Halischuk’s goal. The overtime loss sees Winnipeg fall to 17-10-7, while the Flyers improve to 13-14-6.

Getting the Flyers 25 saves in goal was Rob Zepp, a relative unknown who was called up from the AHL to start on the second night of a back-to-back. With the win, the 33-year-old, who’s toiled in the minors for years, becomes the oldest rookie to win his first start since 41-year-old Hugh Leyman did so in 1926.

Zepp’s biggest moment came late in the second, when he extended his leg across the net to save what looked to be a sure goal for Mark Scheifele. Though it didn’t seem consequential at the time, it turned out to be one of the bigger plays of the night.

On the losing end is Ondrej Pavelec, who made 19 saves but played decent. Flyers goals on this night mostly came from defensive apathy and bad bounces, as opposed to goaltending inferiority.

“The best thing our forwards can do for our defence is skate, get on the puck in the offensive zone and hold it, throw a whole lot of back pressure on them,” said Maurice. “We’ve got to find a way to move the puck a little quicker, a little more surely, and with some confidence.”

“We’ll talk about what happened, you know it’ll be a great test [on Tuesday], because if you kick the puck into the neutral zone against Chicago all night, they’re going to get too many chances. We need to get that cleaned up in 48 hours or less.”

That Chicago game is the last the Jets will play before Christmas. It’ll be followed by a short break, then they play a home-and-home with Minnesota (in Minneapolis, then in Winnipeg) on December 27 and December 29.