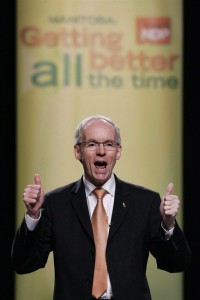 WINNIPEG — A former Manitoba cabinet minister who is running to become the province’s next premier is promising to hold a referendum on whether to repeal the government’s recent sales tax increase.

Steve Ashton, who resigned from cabinet Monday, said the tax hike was badly handled. The NDP government hiked the tax last year by one percentage point to eight per cent while overriding legislation that required it to hold a referendum first.

As transportation minister, Ashton was one of the most passionate and vocal supporters of the tax hike. But at his leadership bid launch Tuesday, Ashton said there are solid reasons against the increase.

He wouldn’t say how soon the tax increase could be rolled back if people vote in favour of that option in a referendum.

Ashton joins former cabinet colleague Theresa Oswald — who resigned along with four other cabinet ministers to protest Premier Greg Selinger’s leadership _ in a race for the top job.

Oswald, who was also at the cabinet table when the tax increase was decided, has said she is open to repealing the tax earlier than scheduled in 2023.

Selinger prompted the leadership race after coming under fire for the party’s sagging fortunes following the provincial sales tax hike. Selinger, who has led the NDP since 2009, hasn’t filed his paperwork yet, but has said he will fight to keep his job at a party convention March 8.

Paul McKie, a spokesman for Selinger, said he wasn’t available to comment on the idea of holding a referendum.

“The premier will not comment on any leadership question from his office as premier,” he said in an email. “The government’s position on the PST and the referendum is clear and on the public record. The questioning of that position has come in the realm of a campaign launch … Not a government issue.”

Through a spokeswoman, Oswald also declined to be interviewed on the idea of holding a referendum.

If the NDP doesn’t hold a referendum on the tax increase now, Ashton warned people will use the next election to express themselves.

“If we proceed with the status quo, I think we will run the risk that Manitobans will find another opportunity to vote on this,” Ashton said. “You learn from your mistakes. I think you have to listen. No government is perfect. I think we have to acknowledge that we should have gone to Manitobans first.”

Ashton ran unsuccessfully against Selinger for the leadership in 2009 when then-premier Gary Doer resigned to become Canada’s ambassador to the United States. He didn’t have the support of any cabinet colleagues then and didn’t have any at his launch Tuesday.

Jim Rondeau, who was demoted from cabinet in 2013, introduced Ashton surrounded by about 40 other supporters. Ashton is the person who can bring the party back together after public infighting and declining popularity, he said.

He said those former cabinet ministers — including Oswald — who publicly denounced Selinger and the decisions made at the cabinet table, broke cabinet confidentiality. Ashton has behaved more respectfully, he said.

“If they had done the honourable thing, they would have left cabinet when they disagreed,” Rondeau said. “If not, your job as a cabinet minister must be to uphold cabinet solidarity.”