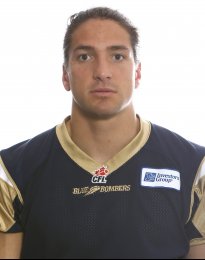 The Winnipeg Blue Bombers have extended the contract of receiver Julian Feoli-Gudino.

Feoli-Gudino appeared in 16 games in 2014, starting seven, after being signed as a free agent in January of 2014.

“Julian became a reliable receiver for us in somewhat limited playing time this past season,” said Blue Bombers GM Kyle Walters. “If you think about some of the big catches he made for us, not just the winning touchdown in Montreal, but also a huge third down catch to keep the winning drive alive in Hamilton, he has shown the ability to come through in the clutch.”

He finished the season with 24 receptions for 210 yards and two touchdowns, including a game-winner with under a minute to play in a July victory over Montreal.