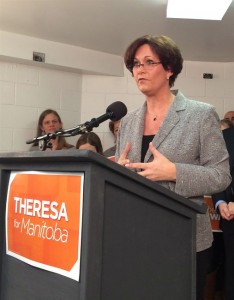 Low-income earners in Manitoba would see a rebate of the PST increase if former health minister Theresa Oswald becomes premier.

The NDP leadership candidate announced Monday a proposed PST rebate for low-income and working families that would help to offset the $75 to $125 more they pay in PST every year since the increase came into effect.

“The PST is helping to improve our roads and create good jobs for Manitobans without having to cut funding from health and education, but we didn’t get it right when it was introduced,” Oswald said. “Manitobans are owed an apology for not being consulted on raising the PST after Greg Selinger said he wouldn’t.”

Oswald’s only other leadership opponent so far is former cabinet colleague Steve Ashton.