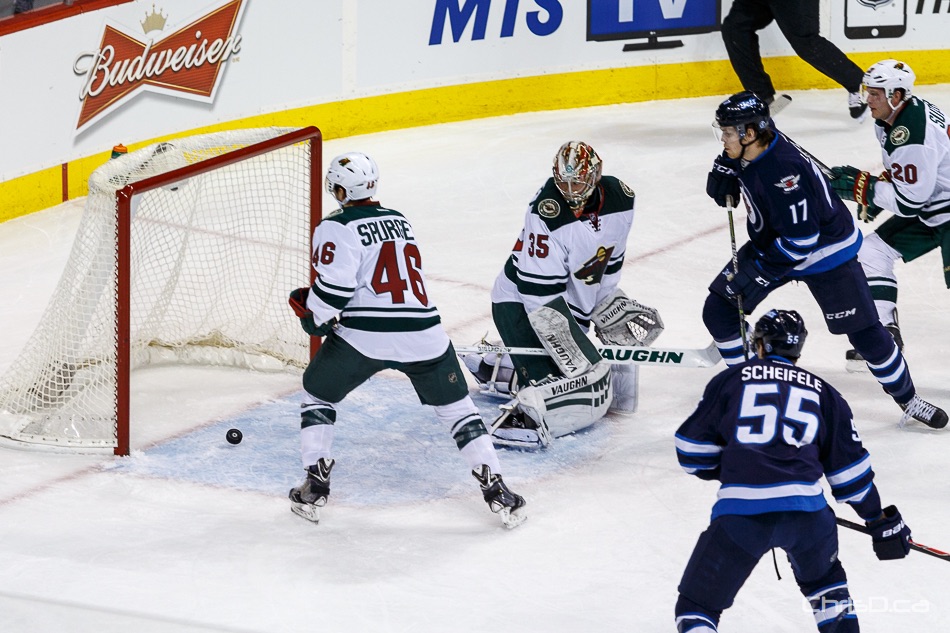 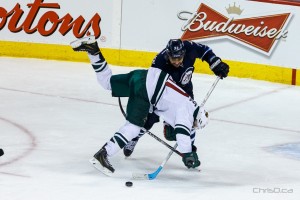 The Jets power play struck twice in short order after being wildly out-shot by the Wild early in the first. Michael Frolik netted his eighth goal of the season with four minutes remaining in the first, and then Mathieu Perreault recorded his ninth on a quick cross-crease feed from Blake Wheeler just 20-seconds into the second.

But the Wild effectively erased the Jets’ two-goal lead with a strong second period push. Even-strength goals from Ryan Carter, Justin Fontaine, and a rifle of a shot from Marco Scandella that deflected off Jets defenceman Jay Harrison with just 12-seconds remaining in the period had Minnesota in front 3-2 through 40-minutes of play, and proved to be enough through 60.

“The telling stat is we had 28 shots blocked,” said Jets head coach Paul Maurice. “That’s what they do. They give up fewer shots than anyone in the league. But it’s usually a sign that your feet aren’t moving quick enough to get into the lane to get the shot through.”

Goaltender Michael Hutchinson made his third-consecutive start for Winnipeg — a first this season for the 24-year-old rookie — and put together some stellar stops during a 1:53 5-on-3 advantage for Minnesota with defencemen Dustin Byfuglien and Jay Harrison off for roughing and delay of game, respectively. Hutchinson finished with 28 saves on 31 shots, dropping his record to 9-3-2 on the season.

“I thought we came out slow. We didn’t have our usual jump,” said Hutchinson. “But we were able to score the first goal, and that was huge for us. And then we had a huge (5-on-3) kill in the first period. We had a big start to the second period and had energy, and we just made a couple mental mistakes and it cost us and it kind of snowballed from there.”

The 19-11-7 Jets host the 24-11-1 New York Islanders in the second match of their four-game home stand on New Year’s Eve with a rare 4 p.m. puck drop at MTS Centre. The Toronto Maple Leafs then come to town on January 3, and the San Jose Sharks follow suit on January 5.