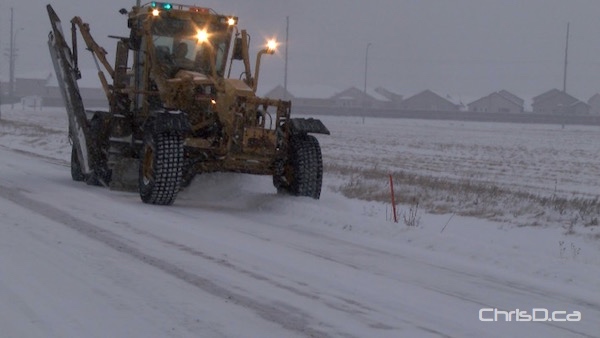 City plows are ready to hit the streets as Winnipeg remains under a snowfall warning.

About 10-15 cm of snow is expected over the next 24 hours, according to Environment Canada. The warning also includes Headingley, Portage la Prairie, Brandon, Minnedosa, Neepawa and Riding Mountain National Park.

The snow is expected to begin falling this evening and into Saturday morning at rates of 1-2 cm per hour. Snow will taper off from west to east overnight as the system tracks eastward into Minnesota.

The city says sanding operations will be carried out on regional streets and collector/bus routes. Plows will be on standby and will roll out if required.

The annual snow route parking ban remains in effect daily on streets designated as snow routes from 2 a.m. to 7 a.m. until March 1, 2015.

← Previous: Teen Charged After Infant Left Outside in the Cold Next: Clearing the Lines of Communication →
Tags: City of Winnipeg | Snow | Weather | Winter