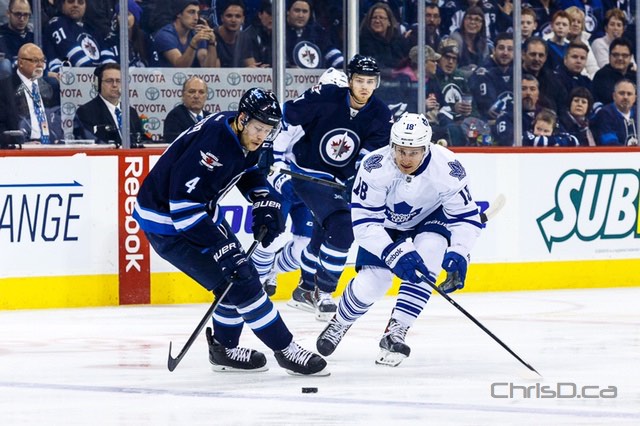 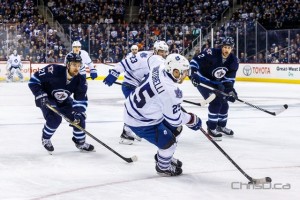 WINNIPEG — On a night where smatterings of “Go Leafs Go” chants were actively drowned-out by bellows of “Go Jets Go” from the MTS Centre faithful, the Winnipeg Jets scored five unanswered goals to beat the visibly fatigued Toronto Maple Leafs 5-1.

The emphatic cheers and jeers from the 15,016 in attendance Saturday night eventually turned into a brief chorus of “Leafs Suck” once Bryan Little‘s team-leading 15th goal of the season made it 4-1 Winnipeg, and the Leafs began to show the signs of playing their fifth game in seven nights.

Little finished the game with three points, while line mate Andrew Ladd chipped in a pair of helpers to keep his lead in Jets scoring this season with 31 points in 39 games.

AHL call-up and rookie defenceman Ben Chiarot scored his first-career NHL goal, finishing with two points as his second period blast from the point was deflected by Matt Halischuk to stand as the game-winner.

“I’m glad it wasn’t an empty-netter or something cheesy like that,” said Chiarot of his first NHL goal. “I’m obviously pretty happy about it… It’s a great feeling.”

Chiarot’s defensive partner Dustin Byfuglien was an absolute force throughout the night, dominating his shifts with uncontested physicality on his way to a goal and an assist, and a plus-4 plus/minus rating.

“He’s just the best player on the ice. Just a dominant force in all aspects of the game,” said head coach Paul Maurice of Byfuglien. “Physically so strong, stops plays off the rush, great defensive stick on the odd rush knocking it out of the air. I think the offensive skill has always been there.”

“Just our team itself — we’re buying-in and sticking to our game plan,” said Byfuglien. “We worry about our defence first and the offence will come.”

Freshman netminder Michael Hutchinson wasn’t overly busy as the Jets held the Leafs at bay for the majority of the game, stopping 20 shots en route to recording his 10th win of the season.

“The last couple games we’ve given up a little bit more chances than we’re used to, and tonight we really clamped down defensively and it really showed,” said Hutchinson, whose 1.81 goals-against average and .937 save percentage are tops across the entire NHL. “I didn’t have to make too many difficult saves and the guys made the game pretty easy out there.”

The Jets complete a four-game home stand Monday night when they host the San Jose Sharks.