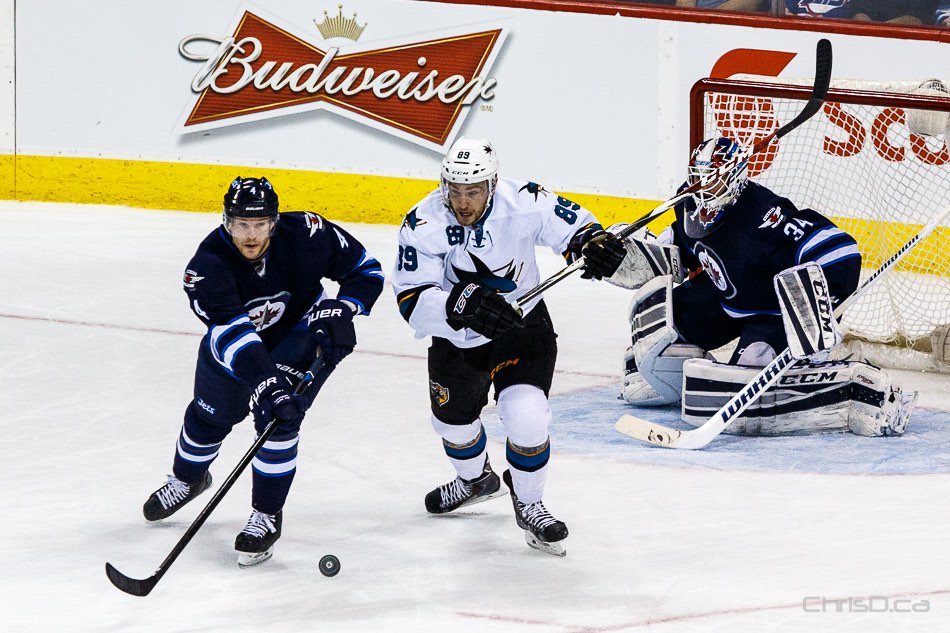 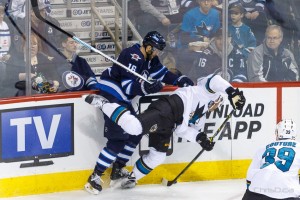 WINNIPEG — The San Jose Sharks spoiled the party at MTS Centre Monday night, notching the winning goal with just 4.5 seconds left on the clock to beat the Winnipeg Jets 3-2.

Moments after the MTS Centre crowd erupted in joy following the announcement of the Canadians winning Gold at the IIHF World Junior Hockey Championships, Marc-Edouard Vlasic walked in and roofed a wrister over goaltender Michael Hutchinson‘s shoulder to send the fans briskly to the doors.

“We have a standard, and I’ve been careful about saying this but we’ve got five guys off our back end out,” said Jets head coach Paul Maurice of the numerous injuries to the club’s top defencemen. “I don’t think that was the difference in the game for us tonight, but it’s not going to look the same way.”

“So expecting us to come out and dominate the San Jose Sharks — it’s not going to happen.” 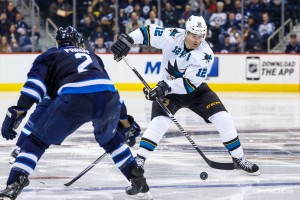 San Jose’s Brent Burns struck first inside the game’s opening three minutes with a point blast on the power play with Winnipeg’s Mathieu Perreault off with a double minor for high-sticking. Moments after the goal, Winnipeg’s Bryan Little took a slashing penalty to give the Sharks a 5-on-3 advantage for 1:38, but the Jets penalty kill stopped the bleeding to keep the score 1-0.

“I just think we’ve got to do a better job with our sticks and staying out of the box,” said Jets captain Andrew Ladd of the team’s seven man advantages — on four stick infractions — given to the league’s 12th-ranked power play unit.

Ladd tied the game midway through the period with a one-timer from the hashmarks, set up by Little, to give the captain a share of the team lead in goals (15) with his linemate Little.

Melker Karlsson‘s tip on a somewhat random Joe Pavelski shot from the sideboards put the Sharks back in front again early in the second, as it squeaked through Hutchinson’s five-hole.

The Jets then found a way to get it back early in the third as defenceman Jay Harrison scored his first goal as a Winnipeg Jet with a power play point shot that beat veteran Sharks goaltender Antti Niemi to make it 2-2.

“We hung around in that game. We didn’t play our best for a full 60 (minutes),” said Harrison, now with eight games under his belt in Winnipeg. “We hung around long enough to give ourselves an opportunity to win the game, and these are stingers, the ones we lose at the end like that so close.”

Now one game short of the season’s midway mark, the 20-13-7 Jets head down south for games in Arizona, Los Angeles, and Anaheim before returning to wintery Winnipeg for a single home date with the Florida Panthers on January 13.