Downtown to Fill with Music of ‘Big Fun Festival’ 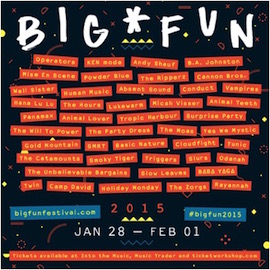 Forty local and out-of-town musical acts will play for a Winnipeg audience during the fourth annual Big Fun Festival later this month.

Running January 28 to February 1, music of all genres will be played at nine different venues throughout the downtown.

The festival is being put on by Big Fun Productions and tickets are $60 for a pass. Select individual acts range from $12 to $15 and can be purchased at Into the Music, Music Trader and TicketWorkshop.com.

Inspired by the layout of Pop Montreal and NXNE, Big Fun aims to create the same excitement within the music and art community in Winnipeg by hosting several events throughout the year.