City Replaces ‘Breakfast Television’ with ‘Wheeler in the Morning’ 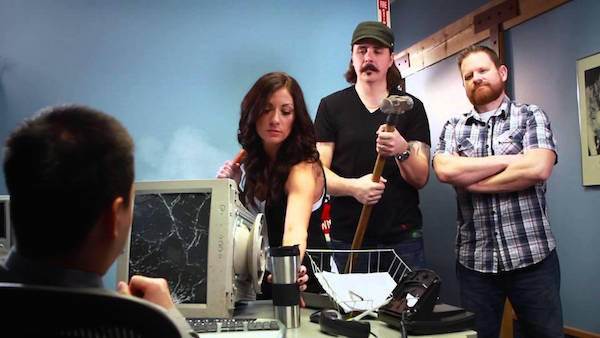 “Wheeler in the Morning” will debut January 12 on City. (YOUTUBE)

Rogers Broadcasting announced Tuesday the launch of “Wheeler in the Morning” to debut on City January 12.

The show replaces “BT,” but will still include well-known City personalities Drew Kozub and Jenna Khan.

“I love being able to wake up Winnipeg every weekday morning with my friends Philly and Rena, and I can’t wait to bring Drew and Jenna into the mix to make our new TV show the best source of morning news and entertainment Winnipeg has to offer,” Wheeler said in a statement.

The show will broadcast from the revitalized City studio at The Forks and viewers will be able to stream it live online.

A total of 14 staff members are affected by the new format. Hosts Courtney Ketchen and Jeremy John, along with a handful of videographers, were some of the casualties.

The radio show “Wheeler in the Morning with Philly and Rena” will continue to broadcast in its current format from 6 a.m. to 10 a.m. CT on 92 CITI FM.

Rogers sent out the below memo to all employees:

Today, City Winnipeg and our radio brand 92 CITI-FM are coming together to create a unique experience for local audiences in Winnipeg.

On Monday, Jan. 12, we will launch Wheeler in the Morning on City in Winnipeg. This TV show builds upon the popular Wheeler in the Morning with Philly and Rena – the #1 radio morning show in Winnipeg – and brings together the best of TV and radio for a unique and seamless experience. While the Breakfast Television format remains an important part of our programming lineup, we needed to make some tough decisions in the Winnipeg market and are replacing BT Winnipeg with this new morning show.

Wheeler in the Morning (TV edition) will broadcast live from the revitalized City studio located in the heart of Winnipeg at The Forks. It will be hosted by veteran on-air personality Dave Wheeler and feature City personalities Drew Kozub and Jenna Khan, in addition to current morning radio team Phil Aubrey and Rena Jae. The team will bring their unique brand of lifestyle and entertainment segments, along with in-studio interviews, with the newsmakers that matter most to the city. Wheeler in the Morning with Philly and Rena (radio edition) will continue entertaining listeners in its current format with top-rated chatter and music every weekday morning.

Given the financial challenges we face in conventional TV, we are constantly looking at providing quality local programming to our audiences in a more cost-effective manner. Today’s programming announcement allows us to stay viable and competitive in the changed media landscape while leveraging our world-class brands and on-air personalities and better reflecting the desires of morning audiences in Winnipeg. As a result of these changes, 14 full-time employees were impacted while 11 BT employees were relocated to the new morning show.

On behalf of the TV Management Team, I’d like to thank the team at BT Winnipeg for their dedicated and valuable contributions. We have enjoyed watching them over the years and wish them all the best in their future endeavours.

With tremendous heartbreak that I announce @BTWinnipeg is no more, and I am no longer with the show. It was the best 3.5 years of my life…

Good things memories can never be taken away… thank you to everyone who made getting up at 2:30am easy.

Winnipeg is my home, born and raised, and it was the greatest privilege to meet so many amazing people and wake you up with a smile.