Keith and Renée to Release New Album at Park Theatre 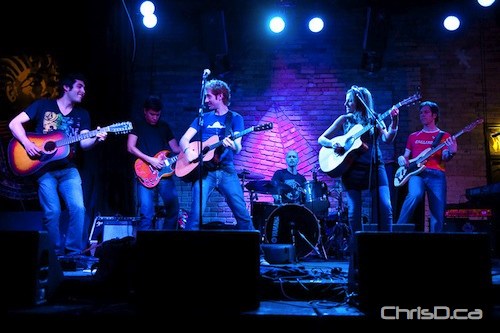 Keith and Renée perform at the Pyramid Cabaret in this file photo. (TED GRANT / CHRISD.CA)

Manitoba musical duo Keith and Renée are feeling good to start off 2015 with the anticipation of a new album.

Titled Feel Good Thing, the 12-track CD features songs written and produced over a three-year span during their Nashville, Toronto and Winnipeg visits.

“Life can be pretty tough and overwhelming sometimes if you get caught up in the negative. We wanted to reach out and have an album that makes us feel good and sing at the top of our lungs so we can forget about the many stresses and focus on the fun,” Keith Macpherson and Renée Lamoureux said in a joint statement.

The album is packed with several superstar artists, writers and musicians who all played a significant role in the making of — what they’re calling — their best album to date.

“This is a special album created by two gifted and wonderful people,” said Jill Snell-de Cartier, founder of Road Angel Entertainment, who manages the two. “I couldn’t be more proud to introduce people to their new music.”

The album release and concert is Saturday, January 31, 2015 at the Park Theatre. Tickets to the all ages show are $20 in advance or $25 at the door.