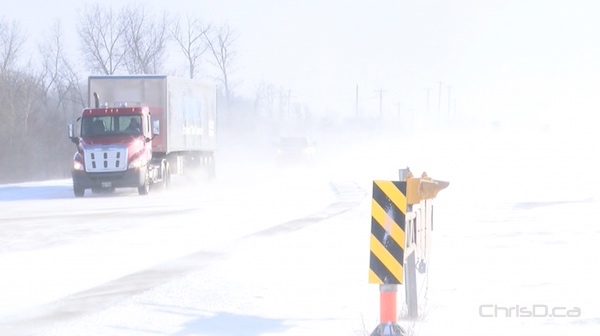 WINNIPEG — A blustery day in southern Manitoba on Thursday made for multiple vehicle crashes, keeping RCMP and other emergency personnel extremely busy.

Wind gusts reached 69 km/h in Winnipeg and a few kilometres higher just outside the Perimeter Highway.

At around 11:30 a.m., an SUV collided with the back end of a semi-trailer in the eastbound lanes of the Trans-Canada Highway near Provincial Road 31 West in the RM of Portage la Prairie.

The 42-year-old Winnipeg man driving the SUV was taken to hospital in stable condition. The semi driver wasn’t injured.

Road conditions are believed to be a contributing factor due to poor visibility and high winds.

Two other collisions occurred in the same vicinity as drivers were slowing down approaching the first crash scene. The minor collisions didn’t result in any injuries.

The Trans-Canada Highway from Winnipeg to Portage la Prairie was closed for approximately seven hours as of 12:30 p.m.

RCMP are reminding drivers to reduce their speed during inclement weather and that the posted speed limit only applies during ideal conditions.