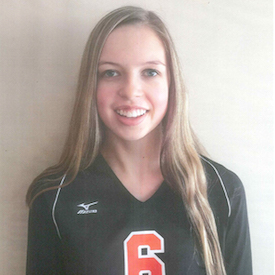 The University of Winnipeg Wesmen women’s volleyball team has received the commitment of a promising Manitoba athlete for the 2015-16 season.

Rylie Dickson of Killarney will join the Wesmen for the start of the Canada West season in September.

The 5’10” setter had a successful final year of high school volleyball at Killarney Collegiate. She was a member of the AA Provincial Championship team and her consistent play led to her being named Provincial MVP and a Graduating All-Star.

“She (Rylie) is an excellent athlete, student and person. I have had the privilege to coach her the last number of summers and have only seen growth and improvement,” said Wesmen head coach Diane Scott. “She is a natural leader with smarts and all the right composure to run the floor.”