By Alexandra Posadzki, The Canadian Press 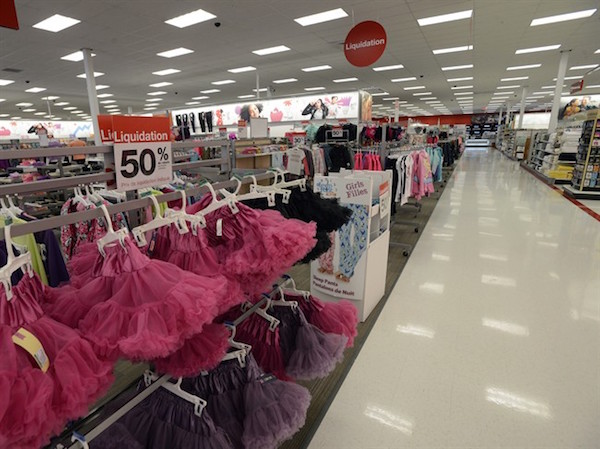 Liquidation items for sale are shown in a Target store in Saint-Eustache, Que., on Thursday, Jan. 15, 2015. Target says it will close its stores in Canada — a market that it entered only two years ago. The U.S. based retail company has 133 Canadian locations and 17,600 employees across the country. (THE CANADIAN PRESS/Ryan Remiorz)

TORONTO – U.S. retailers planning to cross the border can learn some valuable lessons from the failure of Target, which announced Thursday it is shutting down its 133 Canadian stores just two years after its much-anticipated launch.

“It’s a huge thing, after two years, for a brand like Target to wave the white flag,” said Doug Stephens, the founder of Toronto-based consulting firm Retail Prophet. “I think that really sends a very strong message to others that maybe the Canadian market isn’t the easy pickings that they thought it might be.”

Canadians, who had high hopes for the discount retailer known for its broad product selection and low prices, were underwhelmed when they discovered bare shelves and less-than-impressive pricing in the new locations.

It all speaks to the importance of understanding the Canadian market and making a good first impression, Stephens said.

“You’ve got to deliver on customer expectations or exceed them.”

Target’s missteps, including supply chain issues that left shelves nearly empty during the all-important launch, could serve as a cautionary tale for other U.S. retailers, experts say.

Although the luxury retailers are catering to a different demographic than Target, Stephens says they would do well to heed some of Target’s hard-earned lessons.

“Anyone who lives in Canada and has shopped in a Saks Fifth Avenue store or in a Nordstrom store has an expectation that service is going to be absolutely outstanding, that the products are going to be merchandised beautifully and that the quality of everything is going to be wonderful,” said Stephens.

“The Bay has a lot at stake here … They can’t afford to let the Saks Fifth Avenue customer down. If they do they’ll lose them forever. And Holt Renfrew will simply sit there with its arms folded and say, ‘See we told you. You never should have left us in the first place.'”

Retail analyst Mark Satov says the biggest lesson for U.S. retailers is to test the Canadian market by entering at a gradual pace, rather than opening a large number of stores at once.

“You dip your toe into a new market and you learn, while controlling the potential loss,” Satov said.

When Target first entered Canada, they opened more than 120 stores in the first year — a “Herculean feat” for any retailer, said Stephens, but especially challenging for a chain with no practice integrating large acquisitions.

Ultimately, Target failed to grasp some of the nuances of the Canadian market that its more established competitors understood, said Satov.

Due to factors including higher taxes, steeper labour costs and greater consolidation in Canada, it was impossible for the retailer to offer the same low prices as it does to U.S.consumers, said Satov. That ultimately wiped out the discount chain’s competitive advantage.

“The Canadian consumables market is much more consolidated than it is down here in the U.S. and, because of the consolidation, the price points are much tighter among the competitors,” said Satov.

Daniel Baer, a Canadian retail expert industry at Ernst & Young, says the country’s population is spread over a larger geographic area than the U.S., which raises distribution costs and should be considered when deciding where to place distribution centres.

“There are important subtleties there in terms of the supply chain that come into play in a country like Canada that is so spread out,” he said.

While U.S. chains may pause to consider Target’s failure, the company’s exodus is good news for other Canadian retailers, with Wal-Mart Canada and Canadian Tire (TSX:CTC.A) set to benefit the most, according to RBC analyst Irene Nattel.

However, Baer says there is still room in the Canadian retail market for new U.S. entrants that have a compelling offer.

“I think we’ll continue to see U.S. retailers come into the market,” he said. “There are some that have entered the market quite successfully. I think what we’ll see is that they’ll enter the market using a more paced, or more measured, approach.”