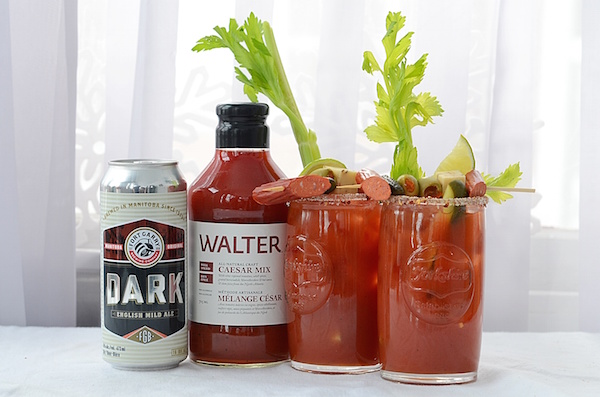 WINNIPEG — A request for a Caesar at any bar in the United States will likely earn you odd looks and questions about a dinner salad. It’s a Bloody Mary you’ll get — a cocktail similar to a Caesar with one significant difference. The created-in-Canada Caesar contains clamato juice while the Bloody Mary has tomato juice. Most often, both use vodka as a spirit of choice, but beyond that, variations are endless.

One of the common tricks is to substitute the vodka with beer, making something called a Beer Mary. But on a recent trip to Illinois, the bartender used both vodka and Guinness in my cocktail. It was fantastic!

Another way to elevate your Caesar is to use a really great mix. Walter Caesar is a craft-style mix, made in Canada in small batches. It’s free of MSG and gluten and uses only OceanWise seafood products. It comes in a glass bottle. In a word, it’s delicious.

So get yourself some hefty glasses, a bottle of Walter Caesar, a can of Fort Garry Brewing Company Dark Ale, premium vodka and plenty of tasty garnishes. Enjoy Canada’s official cocktail in delicious style.

It’s perfectly acceptable to use the Walter Caesar mix as is, but I like to ramp things up with the addition of more savoury ingredients. If you can’t find fresh horseradish, use the bottled variety. Mix coarse salt and red pepper flakes together and set aside in a small saucer. Moisten the edge of your glass. Dip in salt and pepper mixture. Fill half the glass with ice. Add vodka, beer, Caesar mix, horseradish, Worcestershire, hot sauce and lime juice. Mix well. Garnish galore.

← Previous: Stay in Your Car No Matter What: Professor Popsicle Next: Decoding the Recipe for Success →
Tags: Food | Manitoba