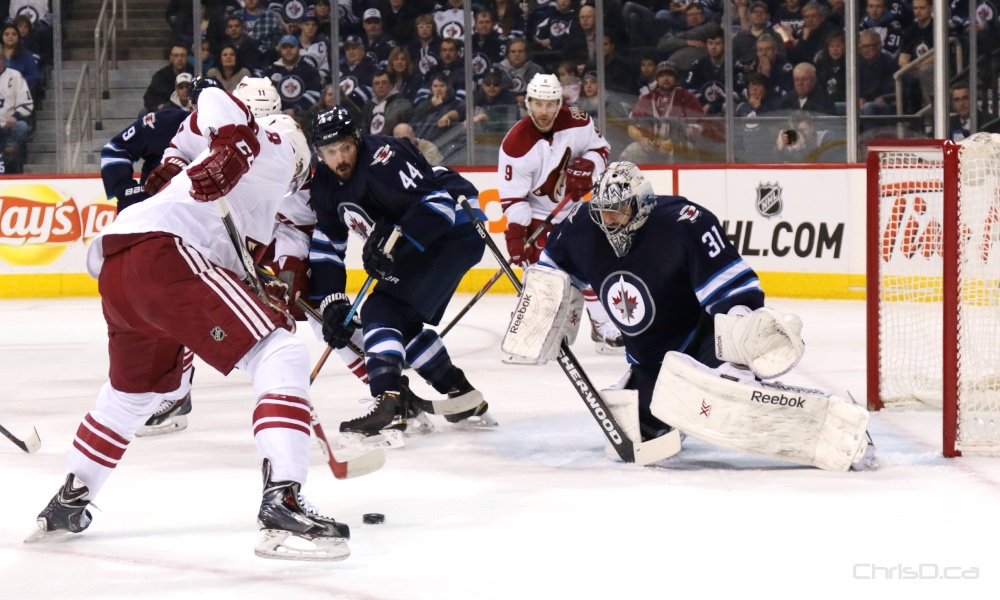 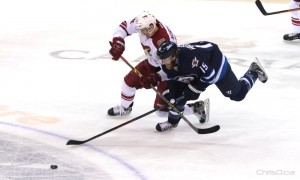 WINNIPEG — Sunday was Bryan Little‘s night as the Winnipeg Jets’ leading goal-getter lit the lamp early in the first and then netted the only marker in the shootout to lift the Jets to a 4-3 win over the Arizona Coyotes at MTS Centre.

“There’s leadership right there,” said Jets head coach Paul Maurice of Little, who has been battling an undisclosed injury and has missed several practices and game-day skates during a hellacious stretch of seven games in 11 days (where the club has gone an impressive 5-1-1).

“That you would come to the game every night and think (Little) is feeling 100 per cent by the minutes (he’s playing), and knowing that he’s not practiced. His play has actually gotten stronger in this stretch. He was really good in the last three or four games.”

“That’s leadership. He’s a quiet man,” added Maurice. “But he’s a real strong leader in that room because he may well be the most consistent performer that I’ve seen in my time here.”

“I am trying to get it off my stick quicker this year,” said Little, who now leads the Jets in goals with 18 in 47 games. “Obviously some of the goals I’m scoring have been tap-ins and empty-netters, stuff like that, so guys are making great passes to me as well.”

Little was the only player from either team to score in the shootout.

“Just from watching the first couple guys ahead of me — it’s kind of an advantage shooting third — I saw that he kind of dropped his glove on (Blake Wheeler‘s attempt) and I had my mind made up with what I was going to do.”

Once Little drew first blood just 4:08 in the game, Arizona responded less than four minutes later as Oliver Ekman-Larsson was fed a pass from behind the net by former Winnipeg Jets 1.0 player Shane Doan, allowing Ekman-Larsson to to beat a screened Ondrej Pavelec with a one-timer.

The Jets re-gained the lead early in the second period as Michael Frolik took full advantage of a Connor Murphy giveaway with Coyotes goaltender Mike Smith handling the puck behind his own net.

Following a back-and-fourth series of odd-man rushes midway through the third, centreman Mark Scheifele saucered a pass to Dustin Byfuglien on a 2-on-1, allowing the recently named NHL All-Star defenceman to record his 12th goal on the year and ninth point in his last six games with a wrister over the shoulder of Smith.

The Coyotes pressed late and were able to score twice in the final seven minutes with goals from Lauri Korpikoski and Tobias Rieder to force the game to a decision-less overtime.

The Jets host the Columbus Blue Jackets on Wednesday before breaking for the NHL All-Star weekend. They then return to the road for a pair of games — a tour of the state of Pennsylvania on January 27 in Pittsburgh and January 29 in Philadelphia.