Home » News » Manitobans Getting Creative to Swap Snow for Sand

Manitobans Getting Creative to Swap Snow for Sand 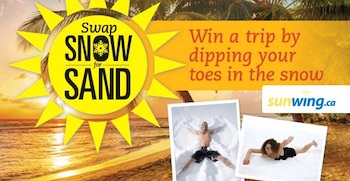 Manitobans have hot, sunny destinations on their mind this winter and they’re proving to go above and beyond to win a free trip.

CAA Travel has been running its Swap Snow for Sand contest for several weeks, which calls on Manitobans to take a picture or video of themselves doing something wacky or creative while barefoot in the snow. The top five entries to gain the most votes will be chosen on January 28 and moved along to a panel of judges.

“Even though the last week or two have been mild as far as winter goes, it’s still not a beach with sun,” said Mel Carter, corporate manager of travel for CAA Travel. “Nothing beats a trip down south.”

CAA says some entries have included someone hauling wood in a bikini, running barefoot with a tutu and swimming in snow with a snorkel and flippers.

Nineteen entries are posted on the CAA Travel Facebook page and more than 7,100 people have already voted.

A recent CAA Manitoba survey found over half of members said they plan to go on a vacation before winter’s end, and 70 percent of those travellers are flocking towards the sun.

Disclosure: CAA Manitoba is an advertising partner of ChrisD.ca.