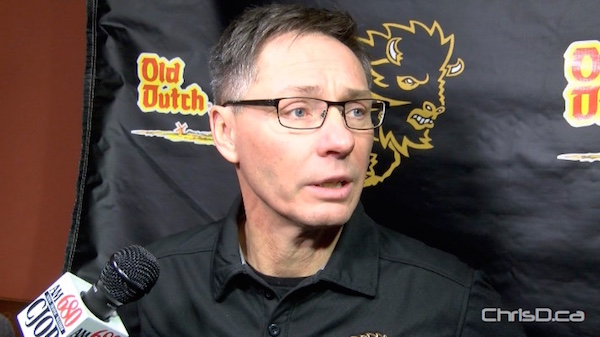 WINNIPEG — The Manitoba Bison men’s hockey team is off to a comforting start in the second half of the 2014-15 season and they want to keep it that way.

The Herd (12-12-0) secured their playoff spot last weekend with a win over Regina, and gets ready to welcome the Saskatchewan Huskies to the city this weekend.

“We would like to get in fourth place, so that means we would host the first round of the playoffs,” head coach Mike Sirant said. “Home ice advantage is always a good thing to strive for, but how it is, we’re prepared to go in and do our best wherever we have to play against whomever.”

The Huskies sit in sixth place with a 10-13-1 mark for 21 points. It’s a crucial weekend for both teams, with Manitoba holding a 7-5-0 home record to Saskatchewan’s 4-7-1 record on the road.

“Saskatchewan, I’d say, is our biggest rivalry in the Canada West Conference. We always have great games against them — a lot of history between the two teams. They’re three points behind us, so this is a huge weekend for them as well.”

Statistically, Bisons goaltender Deven Dubyk is tied for fourth in save percentage at .918 and has appeared in 20 conference regular season games. His tandem on the Huskies’ side is Ryan Holfeld and Jordan Cooke, both who have played 12 games each. Holfeld sits ninth with a 2.61 GAA and Cooke in 10th in Canada WEst with 2.81 CAA.

Puck drop tonight is at 7 p.m. at Wayne Fleming Arena on the U of M’s Fort Garry campus. Both teams will play again Saturday at 6 p.m. The games will be streamed live on CanadaWest.tv.