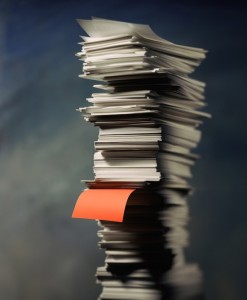 Red tape. It’s something that anyone who has had to deal with government knows all about. It’s the senseless rules and needless bureaucracy that makes it hard to just get something, anything, done.

Red tape is especially onerous on small businesses. For business owners and staff, ensuring that every regulation is met and every form is filled out takes time away from running the business. Complying with red tape costs time and money, while adding nothing constructive to the economy. Because of the impact of red tape on small businesses, the Canadian Federation of Independent Businesses has taken on the reduction of red tape as one of their major initiatives. This week is red tape awareness week.

On Tuesday, the CFIB released their annual Red Tape Report Card grading the provincial and federal governments. Sadly, Manitoba earned a D, the third lowest grade in the country. On the other hand, the province of B.C. earned a grade of A and Saskatchewan earned a grade of B. The only good news for Manitoba is that we have improved from last year’s grade of D-.

British Columbia is the only jurisdiction to receive an A grade, a result of a decade-long initiative measuring and reporting on red tape. Last week, the B.C. government announced that until 2019, if any new regulations are introduced, a current one must be eliminated.

The improvement from 2014’s grade is mostly due to last year’s throne speech, which promised to publicly report the impact of regulations. Beyond that token promise, there has been no move towards measurement or public reporting, nor have their been any concrete measures or actions announced. Additionally, there are no constraints when it comes to new regulations and there is no legislated commitment to red tape reduction.

CFIB did note that red tape reduction in the province was slowly progressing, mostly through industry-specific initiatives. For example, the modernization of provincial liquor laws has been a positive change for both regulators and businesses. Despite the success of such changes, a focus on red tape reduction hasn’t spilled over into a government-wide initiative.

Across the country, the federal government and five provinces have committed to measuring, reporting and reducing red tape. In Manitoba, there has been little action in this area over the past year. A lack of meaningful change means that Manitoba small businesses are continuing to spend time completing duplicate forms, complying with excessive paperwork and following inconsistent or non-sensical rules.

We need regulations to ensure health, safety and fairness, but there is a difference between necessary regulations and unnecessary ones. Reducing red tape is important to all of us if we want to see growth in our province. After all, the time and money businesses and individuals spend dealing with red tape is time that they aren’t improving their products and services, helping customers or spending time with their families. With a high minimum wage and PST, Manitoba is not seen to be especially business-friendly. Making a meaningful effort to reduce red tape would be a step in the right direction.