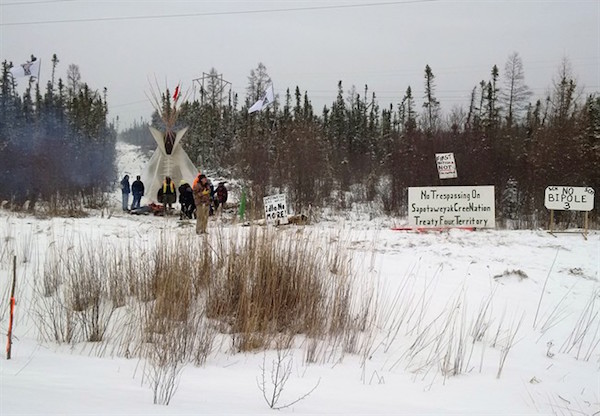 The members of Sapotaweyak Cree Nation man a blockade along Highway 10 north of Swan River, Manitoba on Saturday Jan. 24, 2014. Members of a Manitoba first nation have set up blockades in an effort to stop workers from accessing land needed for a hydro-electric line. (THE CANADIAN PRESS/HO-CJSB-FM-Riley Laychuk)

SWAN RIVER, Man. — Blockades were set up on Saturday to halt work on the Bipole 3 hydroelectric line in western Manitoba.

The two blockades by the Sapotaweyak Cree Nation along Highway 10 were to prevent access for workers who are clear-cutting trees near the community.

The line’s route calls for it to pass through some of the community’s traditional land north of Swan River that is used for hunting and trapping.

Chief Nelson Genaille says RCMP spoke briefly with him and allowed the peaceful protest to continue.

A judge earlier this month denied the First Nation’s request for an injunction to stop construction until it said the province properly consulted with the community.

Bipole 3 is a key part of a multibillion-dollar plan to build new hydro dams in northern Manitoba and bring it south to homes and businesses.

— With files from The Canadian Press / CJSB