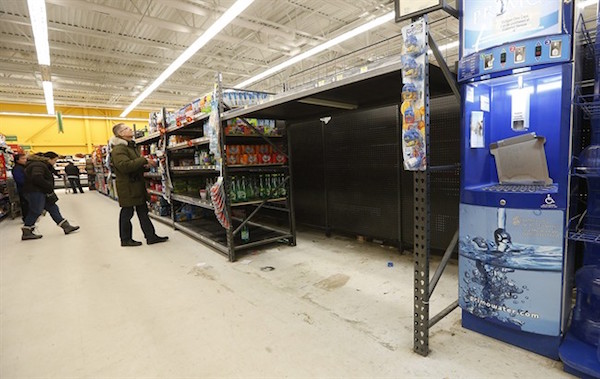 With a run on bottled water earlier in the day late night shoppers were were greeted with empty shelves after Winnipeg authorities issued a boil water advisory after an e.coli positive test Tuesday, January 27, 2015. (THE CANADIAN PRESS/John Woods)

WINNIPEG — With the boil-water advisory remaining in effect until at least Thursday, Siloam Mission has received a large bottled water donation.

“Due to the generosity of the Red River and Federated Coops, as well as others who have already donated water, we are able to continue service to our community without any interruption,” the homeless shelter said in a release.

“We are grateful to Red River Co-op for helping us to replenish this critically necessary emergency supply.”

Organization or individuals interesting in donating water to Siloam Mission are encouraged to call (204) 956-4344.