Home » Entertainment » New Warming Huts Near Completion at The Forks

New Warming Huts Near Completion at The Forks 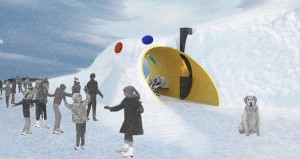 Winning architectural teams from across the world are in Winnipeg this week putting the finishing touches on their warming hut designs.

The popular attractions will line the city’s river skating trail once complete, acting as shelter for those on the ice and going for a trek on the adjacent river walkway.

“We’ve seen their designs, but now we get to see their vision come to life,” said Paul Jordan, CEO of The Forks.

“We want people to come and visit the ingenuity and innovation that the warming huts competition has always fostered, hoping they too will be inspired to think outside the box.”

This is the sixth year for the international competition, which had a blind jury choose two huts and an art installation. The fourth hut was designed by Rojkind Arquiectos, who came by invitation from Mexico.

Two other huts were created by architecture students at the University of Manitoba and students from Kelvin High School.

Twelve huts from previous years will join this year’s designs once they make it down to the river.