Home » Columns » Maclean’s Needs to Back Up Racism Claims: Currie

Maclean’s Needs to Back Up Racism Claims: Currie 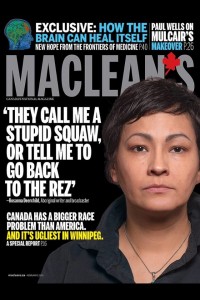 I pay for a subscription to Maclean’s Magazine, but my printed copy of the latest issue came very late. By the time it arrived in this digital age, the country had already been dealing with the bold assertion that Winnipeg, the city where I have lived most of my life, is the community where racism is worst in Canada.

I immediately flashed back to 2007 when I lived in Regina. The same magazine came there for a few hours and declared that the area known as north central in Regina was “Canada’s worst neighbourhood.”

Neither conclusion can be proven with any precision, although both stories have some limited value by drawing attention to serious problems. The 17 pages that Maclean’s devoted to racism in Winnipeg focus on a number of horrible high profile crimes, especially the murder last summer of 15-year-old Tina Fontaine. Many aboriginal Winnipeggers told stories to the reporter of being called racist names, or experiencing discrimination when applying for a job or trying to rent an apartment. As disturbing as the stories are, they do not support the conclusion that my city is the worst in Canada when it comes to racism.

Maclean’s also largely ignores Winnipeg’s colourful ethnic history. White Anglo-Saxons have always been the minority here, and we have always had ghettos. The aboriginal population is now the largest in Canada, and it’s continuing to grow rapidly. 145 years ago, French-speaking Metis, led by Louis Riel, were the majority in the Red River settlement when Manitoba became a province. Indeed the Metis rebellion was not a failure.

Today, the Asian population of Winnipeg is growing even faster. I can’t believe for a moment that racism hasn’t also been a problem for those Canadians, even though we don’t hear much about it.

Bravo to Winnipeg Mayor Brian Bowman for acknowledging the problem, and the obvious conclusion that we need to do better.

We could also do better with magazines that are prepared to dig a little deeper, and not just look for a grabbing headline about who is the worst.