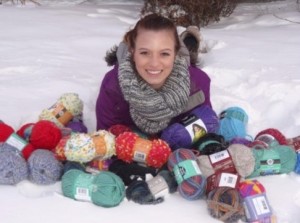 A Winnipeg high school student has launched an online campaign to raise yarn and fleece donations to knit scarves.

Alex’s Scarves is the creation of Alex Arrigo, a Grade 12 student at JH Bruns Collegiate. Along with 10-15 of her classmates, the volunteer-driven campaign aims to make 60 scarves for children in grades one to three at a Louis Riel School Division elementary school.

“My goal is to raise 30 skeins of yarn and 10 metres of fleece by February 6,” Arrigo said. “With Winnipeg’s sometimes brutally cold winters, we want to help elementary school children keep warm.”

Yarn donations are being requested in multiples of two skeins, each with a weight of six. Fleece donations are asked to be a minimum half metre in length, which will all be used to make customized scarves for boys and girls. Donations can be dropped off at JH Bruns Collegiate, 250 Lakewood Boulevard, or Protegra, 67 Scurfield Boulevard, between 8 a.m. and 4 p.m.