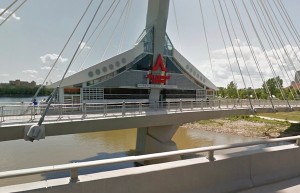 The former Salisbury House on the Esplanade Riel pedestrian bridge where Chez Sophie has occupied as of most recently. (GOOGLE STREET VIEW)

A French eatery on Winnipeg’s Esplanade Riel footbridge has closed after nearly 18 months in business.

The owners of Chez Sophie sure le pont announced on their Facebook page Monday that they will cease operations immediately.

“After careful and lengthy consideration and consultation with our advisors, it is with great regret that we must announce the closure of Chez Sophie,” said Sophie and Stephane Wild.

“During our two years of operations, we have become rather obvious that the seasonal income was not sufficient to meet the extraordinary expenses related to a restaurant on the bridge.”

Before opening on the bridge, the bistro’s only location was on de la Cathedrale Avenue in St. Boniface. The move to the bridge came with 4,000-square-foot of space and a monthly rent of $2,000 in years two to five. An agreement with the City of Winnipeg saw the first year of the lease covered.

The Wilds thanked the city, their business partners, suppliers, employees and customers for their loyal support.

“Sorry to have to make this announcement. We truly were committed to the success of this project.”

← Previous: Salamida Returning to Goldeyes for a Sixth Season Next: WECC Teams Up for Audio-Visual Show at the WAG →
Tags: Food | Winnipeg