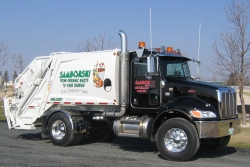 A composting business on the outskirts of Winnipeg will have its compost material removed by the province after an Environmental Protection Order was upheld over the odour it produces.

Samborski Environmental Limited was ordered to comply with a ruling that stated it had to remove its compost material by December 1, otherwise the province would hire a contractor to do the job and recover costs from the company. That work began today by Progressive Waste Solutions after Samborski Environmental “failed to demonstrate satisfactory progress in the removal of compost.” It’s expected to take three weeks and cost approximately $400,000-$500,000.

General manager Paul Samborski says what the province is doing is considered theft.

“If I came into your house and took your TV, that’s theft, isn’t it? We’ve put a lot of work into this material,” Samborski said. “We’re burned a lot of man hours, we’ve worked diligently on managing this material, on working to keep material out of a landfill. And guess what? This is going to a landfill.

More than 500 complaints about the company have been received by Manitoba Conservation and Water Stewardship over the past five years. Under the Environment Act, the province deemed the company was a pollutant.

Samborski is waiting on permits to relocate to a site further south from the resdiential Whyte Ridge neighbourhood in the RM of Macdonald.

The contractor will move the material to its licensed facility by the end of February.