Jets Drop First of Season to Blackhawks in OT 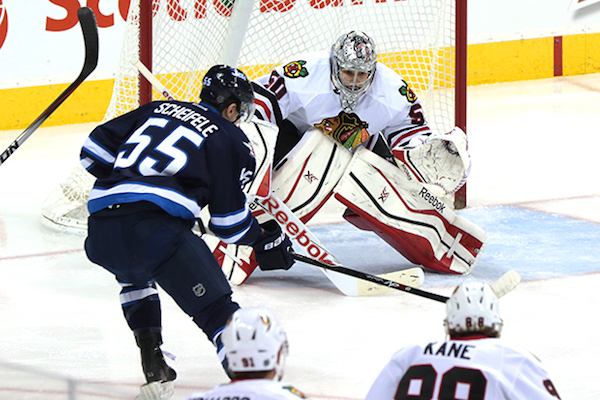 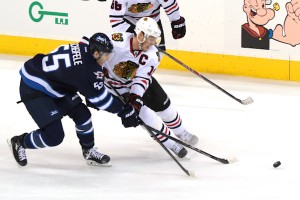 WINNIPEG — The Winnipeg Jets have had the Chicago Blackhawks’ number this year, entering their fourth meeting of the season Friday night having already beat them three times despite trailing them in the standings all season.

In their first meeting at MTS Centre the Jets also fell for the first time to the Hawks — 2-1 in overtime in a physical and defensive affair. The loss — although they grab a single point in the standings for forcing the game to extra time — is Winnipeg’s sixth-straight defeat since entering last month’s All-Star break on a season-high five-game winning streak.

Brandon Saad notched the game-winner 3:01 into the five-minute overtime period — a well-placed Patrick Kane pass from behind the net that Saad was able to bury from the low slot into a gaping cage.

“It was a tight-gapped game, so there wasn’t a lot of flow to it,” said Jets head coach Paul Maurice. “Which is fine. With the talent and speed they have in their lineup that’s the way it has to be played.”

It is little surprise the shots on goal count finished a low 22-21 in favour of Chicago, while both clubs went fruitless on the power play with one opportunity apiece. The Jets (26-18-10, 61 points) remain directly behind the Central Division’s third place Blackhawks (32-18-2, 66 points).

“There’s a lot of good things we can take out of that,” said Dustin Byfuglien, following his second game playing back at forward for the Jets after the announcement earlier in the day that Evander Kane would be out for for season due to shoulder surgery. “During the stretch we’ve been in I thought we battled all throughout the night and we stuck together. We played a good game.”

Winnipeg’s Mark Scheifele snapped his 10-game goalless drought when he opened the scoring just 4:17 into the game. Mathieu Perreault‘s centreing pass re-directed off the official’s skate and right to Scheifele, giving him a clear path to the net where the 21-year-old sophomore tucked it under the bar high glove on Blackhawks netminder Corey Crawford.

Chicago evened things up early in the second as the Jets were caught on a line change. Blackhawks sniper Patrick Kane went backhand off the deke to beat Winnipeg’s Michael Hutchinson. Kane’s 26th of the season moved him to within a single point of the NHL scoring lead before his league-leading point came with the helper on Saad’s OT-winner.

Kane’s 58 points in 52 games ties him with Philadelphia’s Jakub Voracek.

It was to little surprise rookie goaltender Michael Hutchinson got the call for the Jets on Friday, entering with a perfect 3-0-0 record against the Hawks this season, a sterling .971 save-percentage, 1.00 goals-against average, and one shutout. The 24-year-old finished with 20 saves in the loss, dropping his record to 14-8-2 in his 23rd start of the season.

“I felt I was seeing the puck well and they made two good plays to beat me. Those things happen,” said Hutchinson. “My game, just like the rest of the team’s, I think is moving in the right direction. I’m really looking forward to our game on Sunday.”

The Jets continue their three-game Central Division home stand when they host the Colorado Avalanche on Sunday and the Minnesota Wild on Tuesday.