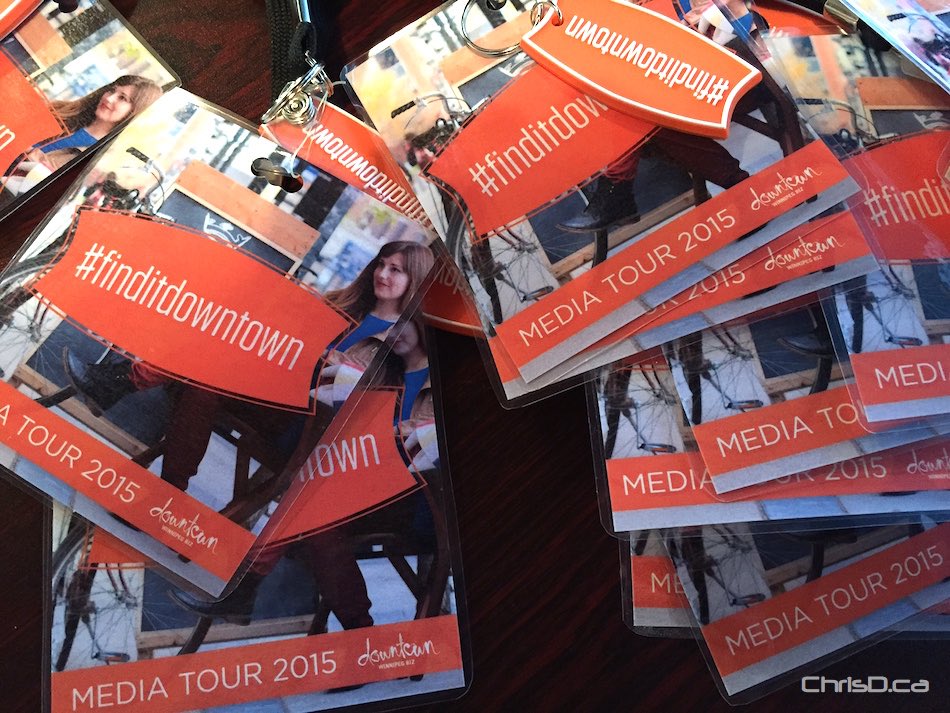 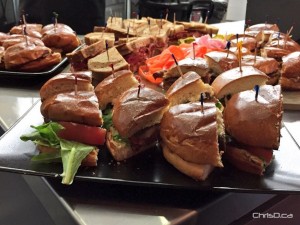 Sandwiches prepared for guests at Nick’s on Broadway aboard the downtown sleigh ride media tour. (CHRISD.CA)

The Downtown Winnipeg BIZ wants you to find “it” downtown. Whatever it is can be anything you can imagine, but for starters, it’s the food.

The BIZ organized a sleigh ride media tour Thursday for roughly 20 people under the banner of its new #FindItDowntown campaign. The two-hour tour began at Nick’s on Broadway — the area’s newest tenant at just over three-weeks-old.

Nick’s specializes in sandwiches, but not the run-of-the-mill fare. Chef/owner Nick Graumann and fellow chef Ana Damaskin prepare a delicious pastrami and swiss specialty, which they sampled for those gathered this week. Also on the sandwich menu is a beef/cheddar combo, ham/swiss, chicken salad and veggie. 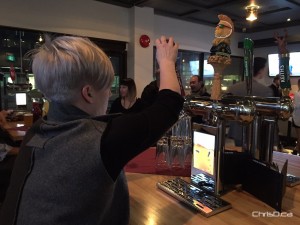 Nick’s also serves up homemade soups, salads, and fruit and vegetable platters to its catering clients. If just a light snack is more of your preference, tiny boxes of chocolate-covered popcorn with pumpkin seeds, sunflower seeds and quinoa is available for purchase at the cash register — perfect for a mid-afternoon pick-me-up.

As media, Tourism Winnipeg officials and other guests boarded the horse-drawn sleigh shortly after 5:30 p.m., the next stop on the agenda was Carbone Coal Fired Pizza. Their newest location at 260 St. Mary Avenue is seven-months-old and offers a familiar menu to their original location at 1580 Taylor Avenue. 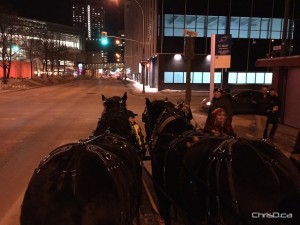 Staff were quick to bring out freshly-made samples of several of Carbone’s specialty pies, including the Isabella, Tyrol, New White, Calabrese, Peppino and Bella. Based on reaction around the room, the New White (ricotta, parmigiano, cracked black pepper, cherry tomatoes, spinach pesto and roasted garlic oil), along with the Calabrese (calabrese salami, roasted red peppers, kalamata olives and spicy eggplant) appeared to be the most popular. 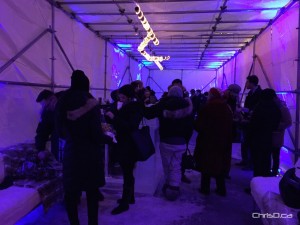 Carbone’s downtown location is also home to the only self-pouring beer tower in Winnipeg, offering up Heineken, Alexander Keith’s, Half Pints, and Shock Top Belgian White.

With the evening quickly ticking away, Downtown BIZ managing director Jason Syvixay rounded up the group to reboard the sleigh. And what better music to play while cruising down St. Mary Avenue on a relatively balmy night than Taylor Swift? Spirits were high as the clanging of horse hooves on the pavement took guests over to Graham Avenue.

The last stop on the tour was Rudy’s Eat and Drink, who has just unveiled a new igloo ice bar in their patio area. The professionally-sculpted bar top and “ice couches” draped in animal hide make up the colourfully-lit atmosphere to help you relax in the heart of the city as a DJ works turntables at the end of the tent.

The bar menu includes a mix of cocktails, wine and beer, including The Mint — made up of belvedere vodka, cane syrup, lime juice, mint and cucumbers.

The ice bar will be open Thursday, Friday and Saturday evenings, weather permitting.

The BIZ holds similar tours throughout the year for the general public and government officials, meant to highlight tourism trends in the downtown, new developments and investments being made in the core.