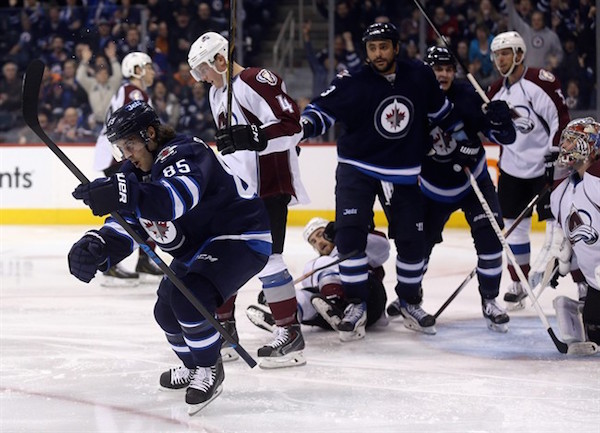 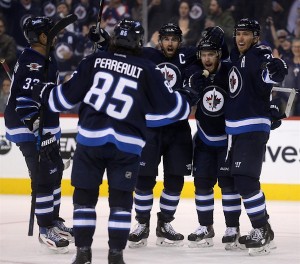 WINNIPEG — An unanswered four goal outburst in the second period lifted the Winnipeg Jets to their first win seven games Sunday night, halting the Colorado Avalanche from rolling through the Manitoba capital with a convincing 5-3 decision.

Dustin Byfuglien and Mathieu Perreault each had three-point nights with a goal and a pair of assists apiece, while Bryan Little and Mark Scheifele each added a pair.

“(It’s) good for our confidence offensively. Because we’ve been working on our defensive side of the game,” said Perreault, now sitting at career-best 18 goals on the season, tying a mark he set last year as a member of the Anaheim Ducks on a line with Teemu Selanne. “We’ve been doing a much better job of (the defensive side, and when we do that this is when we create offence. Good defence create offence.”

Bryan Little’s game winner came on a 5-on-3 advantage, adding to his team-leading goal total that now resides at 21 on the season.

“Tonight we didn’t even really have a plan (for the 5-on-3). We just kind of went out there and said ‘let’s move it really quick’ and that’s what we did and it opened some lanes up for us,” said Little. “If we get another one hopefully it works just as good as that.”

Colorado scored the only goal of the first period as Tyson Barrie ripped a wrister from the high-slot, beating Ondrej Pavelec high blocker soon after an Avalanche power play expired and with another on the way on a delayed penalty call.

Colorado’s Matt Duchene was able to stop the bleeding early in the third with his 14th of the season, but Jets defenceman Jacob Trouba added an insurance marker midway through the frame to make it 5-2. Colorado added a late one soon after their third power play expired as Alex Tanguay added to his team-leading point total with his 14th goal of the season and 36th point.