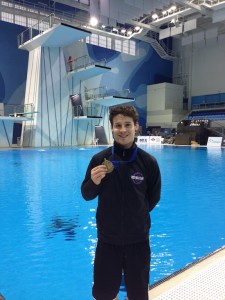 Winnipeg diver Cam McLean is the 2015 national champion winning gold in the men’s open 1M over the weekend.

McLean was competing at the 2015 Winter Senior Nationals in Toronto on Saturday, where he finished with a score of 368.25, including scoring a 9.0 from one of the judges in his second of six dives.

McLean found himself in third place of 12 divers following five of six completed rounds, in which he narrowly defeated independent diver Jamie Bissett from Ottawa.

Next up for McLean is competing as part of Team Canada at the 2015 Pan Am Games.