Pizzeria Donates 350 Pairs of Mitts to United Way of Winnipeg 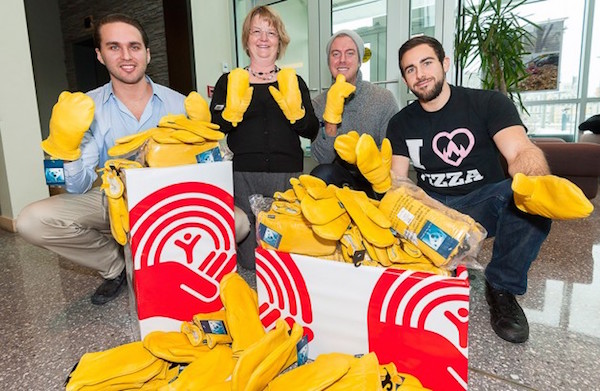 A local restaurant has stepped up to donate 350 pairs of mitts to the United Way of Winnipeg.

Carbone Coal Fired Pizza enlisted the help of their customers and staff to make the large donation to the organization’s Koats for Kids campaign.

Carbone’s Joe Paletta and Benjamin Nasberg dropped off the garbage mitts from Richlu Manufacturing on Tuesday after raising enough money at both of their city locations for the hefty purchase.

“There’s something about Winnipeggers — we know how cold it gets and we want to help kids stay warm,” Paletta said.

Through the generousity of Winnipeggers, it took only a day and a half to reach 200 pairs at $5 each.

Koats for Kids is still receiving donations, as children tend to go through more than one pair in a season.

← Previous: Carving Out Sportsmanship at the Manitoba Legislature Next: Get Your Kids Vaccinated to Protect Them and Other People's Kids: Health Minister →
Tags: Charity | United Way | Winnipeg