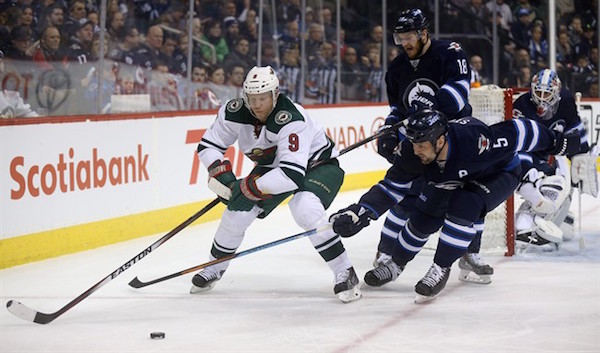 WINNIPEG — The snow is pouring down, it’s mid-February, and we’re obviously a fair distance from meaningful hockey — playoff hockey — in Winnipeg. On Tuesday night, though, the Jets played a game of playoff intensity against the Minnesota Wild.

A chess match for 63 minutes, it was Dustin Byfuglien knocking over the queen two minutes into overtime — snapping in a wrist shot for the 2-1 win.

The game-winner alone was a thing of beauty. Byfuglien intercepted a pass at the Winnipeg blue line then took it the length of the ice, lifting it at the last second over Wild goalie Devan Dubyk’s shoulder. The skill needed to pull it off wasn’t lost on Byfuglien’s coach.

“I’m just not sure how many guys can do that,” said Paul Maurice. “Three on one, using the other three guys as decoys, get it out of your feet and get it upstairs… pretty impressive.”

“I knew my guy was down and four-on-four is a man-on-man type of game, I knew I was going to have room,” said Byfuglien. “It was just keeping my head up and seeing the shot.”

Despite letting in the winner, Dubyk had a remarkable night with 32 saves. During regulation, it was an old-fashioned goaltender’s duel, as Michael Hutchinson performed admirably for Winnipeg after four straight losses in goal, making 29 saves in the win.

After playing puck control-centric hockey to a stalemate through two periods, the Wild and Jets both notched goals in the third period. Winnipeg was first, as Toby Enstrom scored his third of the year when his point shot got some friendly help from Nino Niederreiter’s stick at the net, deflecting the puck past his own goalie.

The Wild pressed quickly, though, as Jason Pominville scored just three minutes later when the Jets fourth line made a poor pass across the crease while pinned back against their net.

Those brief moments of action were augmented by long stretches of pucks played on the outside, as both teams jockeyed for control in a display of patient, workmanlike hockey.

“That’s why we had such a hard time with them the first couple years, because they were playing that style,” said Andrew Ladd. “Now that we’re playing a solid game from our end out, I think it makes for a better game against them.”

“There’s lots of emotion in all these games, especially when the points mean so much down the stretch.”

The points do matter, as the Jets are now seven points clear of the Wild in the Western Conference wild card race. Vancouver sits in between the two teams in the standings, and Minnesota’s battle against the Canucks on Monday may have created some fatigue down the stretch of this one.

Three of the four games this season between Winnipeg and Minnesota have been decided in overtime. They will meet one more time, on April 6 in Minneapolis.

Winnipeg now heads out on the road for two, with Central Division-leading Nashville on Thursday and Detroit on Saturday. They return to the MTS Centre next Monday to play the Oilers.