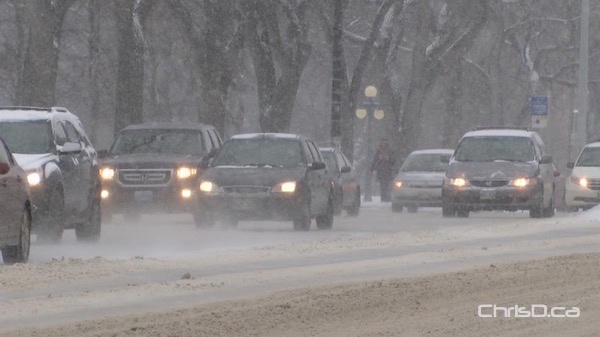 Driving conditions were less than ideal during the morning commute on Osborne Street heading north on Tuesday, February 10, 2015. (CHRISD.CA)

Winnipeg is on track to see up to 10 centimetres of snow today and into Wednesday by the time Mother Nature is finished with us.

In response, the city has declared a snow route parking ban in effect at midnight tonight. Plows will begin operating at 7 p.m. on main routes, bus routes and collector streets.

Crews will focus first on regional streets, followed by collector streets and bus routes. Sanding will be carried out on residential streets and a parking ban will be called later this week.

Sidewalks will also be plowed tonight beginning at 7 p.m., with back lanes getting attention Wednesday at 7 a.m.

The cost of the snow-clearing operation is between $6 million to $8 million.

To find out if the parking ban affects you, visit knowyourzone.winnipeg.ca or contact 311.