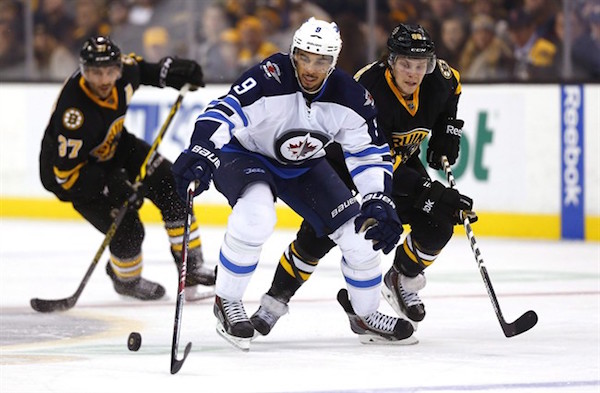 Winnipeg Jets’ Evander Kane (9) keeps the puck away from David Pastrnak during the Boston Bruins 2-1 overtime win over the Winnipeg Jets in an NHL hockey game in Boston on Nov. 28, 2014. (THE CANADIAN PRESS/AP, Winslow Townson)

Evander Kane and Zach Bogosian are no longer part of the Winnipeg Jets.

The two were dealt to the Buffalo Sabres Wednesday, according to TSN’s Darren Dreger, along with goaltending prospect Jason Kasdorf. In exchange, Winnipeg picks up defenceman Tyler Myers, wingers Drew Stafford, Brandon Lemieux, Joel Armia, and a first-round pick.

Kane had been on the injured reserve since last week when he elected to have season-ending surgery on his shoulder. The decision came days after a reported spat with fellow teammates and being made a healthy scratch for a game against the Canucks on February 3.

The Vancouver native, 23, was drafted in 2009 and had spent his entire NHL career with the Atlanta Thrashers/Winnipeg Jets franchise. He had 10 goals, 12 assists and 56 penalty minutes last season with the Jets.

Bogosian was drafted in 2008 by the Thrashers before making the move to Winnipeg when the Jets returned to the city in 2011.

The trade is the first involving an NHL player Jets general manager Kevin Cheveldayoff has made since taking the job.